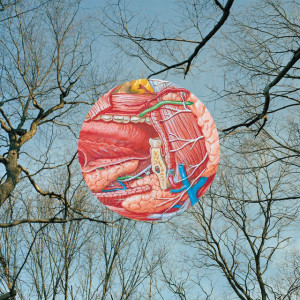 For 33 years now They Might Be Giants have been releasing some of the quirkiest songs known to man, whilst also pushing at the boundaries of music formats. It’s hard to believe in these days of Spotify, youtube, and whatever other on demand music deliver service you care to mention (legitimate or otherwise), but back in 1983, TMBG were already ahead of the game.

By recording songs onto an answering machine and advertising the songs in the local press under the name “dial-a-song” they effectively gave free access to around 500 recordings over several years. Although the original Dial A Song died from technical failure, it has been revived this year, and Glean features a number of songs that first featured as one of those weekly tracks.

Over the course of their time as TMBG John Flansburgh and John Linnell have carved out quite a wonky niche for themselves and it’s got to the point where their band is almost at the point of being casually dismissed as being “that quirky lot who do stupid songs about particle men.” Glean will do nothing to change the minds of their detractors, being an album that’s instantly recognisable as their work, but for those who appreciate what the band does, there’s plenty here to admire and a few that find them at the top of their game.

And what a game it is. The Johns have a habit of writing thoroughly infectious indie-pop gems, and although on first listen their songs appear to be cheery-hearted cartoon caricatures of underwater women or indeed a particle man, there’s more depth to them than perhaps they’re given credit for. Glean is packed with songs that revel in the juxtaposition of jaunty songs and darkened lyrics. It is an album that finds the band delighting in confounding their audience. Whilst this approach is not a new trick, TMBG are absolute masters of it.

Answer, for example skips along like a song written specifically for Kermit The Frog whilst simultaneously documenting an apparently never ending series of disappointments. The birthday pony that never materialised, the steak that wasn’t done correctly, and the partner that is the complete opposite of what you’d imagined are all covered. “I may not be the one you expected, but I am the answer to all your prayers” they sing in a gloriously uplifting manner, whilst pointing out NSA meddling, and that alcoholism is a good way to deal with life.

The spiky and insanely moreish Erase kicks things off in fine style, serving as a reminder of why TMBG have endured. A great post-punk riff, a rolling lyric, and a fabulous hook, it’s songwriting perfection. Music Jail, PT 1 & 2 finds them messing with styles, and sounding like they’ve set up a punk gig at a bah mitzvah, but also dealing with feelings of isolation and fear of dying. The suicidal balladry of End Of The Rope dispenses with the juxtapositions and is perhaps the most direct song here in emotional terms, but still possesses big hooks and seething keyboards.

The stripped back croon of I’m A Coward combines clever word play with a simplistic but effective guitar line. Aaa meanwhile rips out of the traps with considerable vigour, and asks multiple questions, all of which are answered with the same response “Aaarghhhh” (which might be spelled differently to the title but it’s all in the delivery). The wonderful piano led Madam, I Challenge You To A Duel, which apparently describes a set-to between Oliver Reed and Shelley Winters, and showcases the band’s ability to inject humour into their songs with apparently no effort whatsoever.

With such a phenomenal work rate, it’s not surprising that there’s a few clunkers here and there. Underwater Woman for example is lumpen and apparently drowned sometime ago, Hate The Villanelle does little to raise a smile, and the peculiar tea dance jazz of Let Me Tell You About My Operation is fun, but little more and doesn’t bear repeated listens. Despite these occasional blips, They Might Be Giants has yet another album of fine material to their name, and with more songs to be released throughout the year, another will be along in no time at all.