Miles Kane – Colour Of The Trap

by Neil Dowden
published: 9 May 2011 in Album Reviews
Tweet 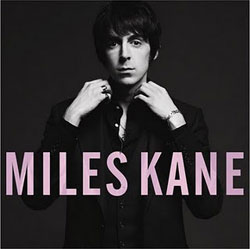 Though still only 25, Miles Kane seems to have been around for ages. The talented Scouser has packed a lot in since starting as a teenager with cult band The Little Flames, who stripped down into the underrated The Rascals, before his side project The Last Shadow Puppets with Alex Turner finally brought him the wider recognition he deserves.

In fact, on his solo debut album Colour Of The Trap Kane has had more than a little help from his friends, with six songs co-written with Turner and one with Gruff Rhys (who also provides backing vocals throughout), plus a couple of other guest contributions – not to mention the diverse uncredited influences from mainly 60s’ musicians.

This is an appealing, well-crafted album, which wears its retro-style clothes with impeccable ease, even if it ultimately lacks a distinctively individual aesthetic. But Kane’s confidently articulated vocal performance and admirably incisive guitar work are bolstered by strong melodies and big choruses, all smartly produced by Dan Carey and Dan The Automator.

On My Fantasy, Kane’s Mark Bolanesque singling is complemented by high-pitched vocal harmonies from Noel Gallagher, in an expression of soft-hearted, rose-tinted romanticism: “I’m trying hard to persuade myself/That you aren’t everything I need.” The big lush sound of Counting Down The Days seems rather aimless, but the understated chic of Happenstance is a coolly seductive duet with breathy Jane Birkinish vocals from French actress Clémence Poésy: “I don’t know who you are/All I know is I’m caught up on you.”

Quicksand is a bubbly pop tune, while first single Inhaler is a garage rocker in which the asthmatic Kane provides three minutes of breathless excitement, with fuzz guitar and female backing vocals. In the vaguely sinister Kingcrawler’s psychedelic-blues swamp-rock, where “Death lurks round the corner,” he’s at his most expansive vocally, but Take The Night From Me is sentimentally soulful.

The psyched up Telepathy sounds like an extra track from The Age Of The Understatement, with twangy guitar and echoing Hammond organ, as Kane emotes: “I can feel you searching around my brain…Until our falling thoughts cascade together.” With its moody descending guitar chords, the atmosphere is heavy with unvoiced feelings in Better Left Invisible: “Confessions are bouncing around my head/So I add them to the archive of things we’ve never said.” But the closing title track sees Kane, accompanied by melodic strings, crooning about love as a seductive entrapment.

Colour Of The Trap may not spring any surprises but it’s easy to get caught up in Kane’s beguiling web of ’60s sound.