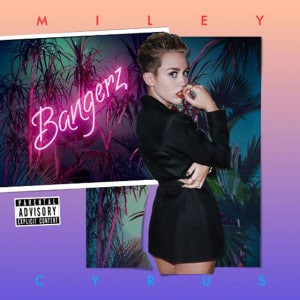 It was only a month ago that everything changed. In the pre-VMA age, Miley Cyrus was just the Achey Breaky Guy’s daughter, most famous for playing a pretend popstrel for Disney and dating a Hollywood star. Then, together with Robin Thicke dressed as Beetlejuice, she created history. She changed the cultural landscape forever. It was, in many ways, the seismic event that ensured we’d never recall 2013 without thinking of her.

Or not, as the case may be. Maybe you saw a young girl, who had probably been badly advised by her ‘people’, run around a stage like a hyperactive toddler desperate for attention, dry-humping a guy twice her age, sticking a foam finger between her legs and have so much trouble keeping her tongue in her mouth you started to fear that may have been suffering from sort of neurological disorder. And then you may have seen the video for Wrecking Ball, in which the said young girl attempts to fellate a sledgehammer, then takes all of her clothes off to ride around on the eponymous wrecking ball, and maybe you started to fear for her sanity.

So, Miley Cyrus – cultural icon or a rather odd young woman who’ll do anything to gain press inches? Whatever one may say about her, it’s impossible not to admire her PR operation. Bangerz has suddenly become one of the most anticipated pop albums of the year which, given the rather run of the mill material it contains, is quite an achievement.

For, if there’s one thing that Bangerz can be described as, it’s run of the mill. There’s obviously a fair number of swear words and lots of references to sex scattered around the place, but even this just sounds so cynical as to come across as utterly innocuous.

Sure, there’s weirdness aplenty – if you’ve ever harboured a desire to hear Miley Cyrus and Britney Spears rap about vibrators (and, let’s face it, there probably is a slightly unsavoury audience for this), then SMS (BANGERZ) is the song for you. And there’s the odd moment where you have to rewind a track to ensure you heard a lyric correctly – and yes, Miley does actually sing “I’m driving so fast I’m about to piss on myself” on 4 x 4.

Songs about lack of bladder control apart, there is the odd moment of pop genius to be found in Bangerz. We Can’t Stop is still a pretty good party anthem, even if it’s been rather overplayed through the summer months, and Pharrell Williams sprinkles his usual stardust over the irresistibly funky #GETITRIGHT (Yes, there is a song here which is also a hashtag. If you’re over about the age of 21 this album is guaranteed, if nothing else, to make you feel very, very old.)

Then there’s the song that’s become more famous for its arresting video – and, as there’s no opportunity to be slightly disturbed by sledgehammers, tears and clothes-free swinging on a huge ball, Wrecking Ball is revealed as a very good power ballad, in which Cyrus sounds genuinely affecting. Beneath the auto-tune (which there is an awful lot of on Bangerz), she does have a decent voice, and Wrecking Ball shows it off to its very best effect.

Generally though, much of Bangerz comes across as Ke$ha or Rihanna cast-offs with added “Look! I have sex!” lyrics like “I’m dancing in the mirror, I feel like I’ve got no panties on”. When Miley’s not shocking us by being the first person ever to discover copulation, she’s singing about broken hearts, broken promises, and on the strangely Lady Gaga-esque – and even more strangely rather excellent – FU, an entire song dedicated to flipping the bird to her former beau. The latter also features the surreal sound of Miley singing in text-speak (“I saw a few things in your cell, I even LOL’d man, I should’ve known”).

There’s also the myriad references to haters (or, as it’s no doubt spelt in Miley World, ‘haterz’), bitches, and, for some strange reason, plenty of references to the album’s producer, the uniquely monikered Mike WiLL Made It. Ironically enough, it’s the tracks that have been produced by people other than Mike WiLL Made It which make the biggest impression – #GETITRIGHT, Wrecking Ball and FU. Made It’s tracks are run of the mill, perfunctory dubstep-lite by comparasion. Maybe, a bit like with sex, it’s the people who keep quiet about their music ‘skillz’ who are best at it.

It’s not the worst album in the world, but it certainly doesn’t live up to the acres of hype that have led up to it. It’s just rather average – and given the position that Miley Cyrus, rightly or wrongly, holds in the cultural zeitgeist at the moment, that’s probably not really good enough.