Million Dead – A Song To Ruin 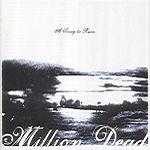 The British hardcore scene is currently awash with talent with the likes of Funeral For A Friend and Hell Is For Heroes both travelling decisively down the road to rock stardom. Million Dead are next in line to succeed but what does this half-Aussie, half-Anglo quartet have to offer?

Well, on one hand they do a fantastic Fugazi impression. Pornography For Cowards, The Breaking Of The Back and Smiling At Strangers On Trains are three-minute blasts of serrated guitars, hyperactive bass and drums, and larynx-mangling vocals, though with a keen sense of melody gluing it all together.

If that was all Million Dead were good at, however, then we could go home now for that would make them no more worthy than a thousand other underground bands. No, Million Dead are so much more than mere imitators sporting pointless angst and aggression – these are hardcore merchants who’ve swapped the Prozac for the prosaic. Check this essay from Pornography For Cowards:

Now here’s a poser for you: you know sexism, the social scourge of the ’60s seen as singularly responsible for a plethora of ills? Well, the reaction, after starting well, has moved from the sublime to the ridiculous through self-defensive actions of the string-vested interests. So please let’s dispense with tired fixations with forms of address, and with constant vilification of legitimate sexual attraction, with weak accusations of inverted discrimination… I’m no qualified social theorist, but I’ve got a few ideas I picked up while I was trying to be a human being… Leafing through so-called lifestyle magazines… The prostitution of dignity for a sense of humour? I’m amazed, and you’re afraid. You’re cowering behind a bravado built on pornography for cowards.

Now those are lyrics, and they’re infused with enough truth that the world should listen and act accordingly. Not that Million Dead are preachy or political propagandists either, simply intelligent. The title track is a case in point: a piece of music that is truly haunting and atmospheric as vocalist (and history student) Frank Turner echoes words drawn from Biblical passages.

Charlie + The Propaganda Myth Machine is another example of punk music acting as an accompaniment to prose with the notable line: “Walt Disney is pushing social and sexual hierarchy.” The album closer, The Rise And Fall, takes things to a new level, meanwhile, as it switches into almost Southern-fried rock boogie licks after three and a half minutes, before heading into ten minutes of guitar feedback and distortion that recall the glory days of grunge (Endless/Nameless by Nirvana, anyone?). Somehow it makes sense.

So what do Million Dead have to offer? Heady punk rock, some of it fairly standard, much of it anything but; lyrics that could start a plethora of post-pub debates; and, all in all, a fine debut album. Now that’s what I call hardcore…