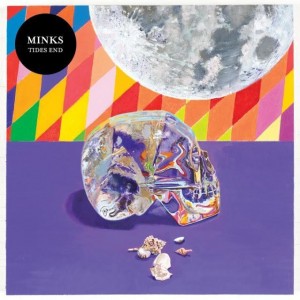 Well, Minks have bucked up a bit. Sonny Kilfoyle’s debut album By The Hedge was a series of vague tracks that were like The Pastels in their drippiest and most depressed moments: seemingly aiming to capture the rainy bleakness of ’80s Britain, but instead just sort of meandering aimlessly about like a lost wet puppy. Next to it, Kilfoyle’s sophomore record looks positively disco.

The album cover has actual colours on it, for one thing. The songs have conventional pop structures. The instruments are actually discernable from one another, where on By The Hedge they all blurred into a kind of ineffectual sonic mulch. There are tracks on Tides End you could actually tap your foot to, if you’re a foot-tapping kinda person. Foot-tapping was never an option with By The Hedge; it was more of a ‘put it on in the background while you’re doing something else’ album. You could’ve used it as a dinner party soundtrack without causing any controversy whatsoever, or had it on while lying on your bed thinking deep thoughts about the universe. Tides End is a triumph, then, but only in that it isn’t quite as ignorable as its predecessor.

It all starts off so promisingly. Opening track Romans is a brilliant slice of Pulp-esque pop with delightfully venomous lyrics: “Happy birthday to the worst friend in the world”, “Happy birthday, can I poison your drink?”. And then…very little happens, for most of the remaining 35 or so minutes of the album. Minks have shed their old skin completely and reinvented themselves as a sort of less interesting Empire Of The Sun or The Big Pink, disowning By The Hedge’s indistinct lo-fi guitars in favour of new-wavey electro pop that’s so shiny you can see your face in it. The result, though, is so pedestrian and tired-sounding that they may as well not have bothered.

Three singles have already been released off Tide’s End, and while they’re all okay, they’re not much more than that. Everything’s Fine is Minks at their most Empire of the Sun-ish, clearly after the zany Australians’ euphoric vibe but actually just sounding incredibly apathetic. Margot is The Smiths given a slick pop makeover and a big chorus; Painted Indian is blend of crunchy guitar, sweeping synths and cascading, shout-along chorus that’s reminiscent of a chirpier but less atmospheric The Big Pink. If Painted Indian had come out in, say, 2008, Radio 1 would’ve had an orgasm over it and played it to death like they did with Dominoes and We Are The People. Nicki Minaj would’ve sampled it and got all the Minks fans bitching on YouTube about how the original is better.

In fact, the problem with Tides End as a whole is that it all sounds a bit like a blander, toned-down version of every electro-rock album released in the late Noughties, and unfortunately for Minks, five years isn’t long enough for people to get nostalgic about a certain sound. It sounds like what you were listening to before the Olympics, before the 2010 general election, before ‘queer’ rap and the psych-rock revival and Lana Del Rey – a sound recent enough not to be exciting and alien to the folk of 2013, but old enough to be out of date. It’s not a terrible record by any means: it’s sophisticated in its construction, despite some cringeworthy lyrics (“Like a Kennedy, you’re gone before your time”) and general air of half-arsedness. There are some good moments, but they’re only good because they’re leaning extremely heavily on (ie. shamelessly borrowing from) New Order and Pulp. Save yourself the effort.