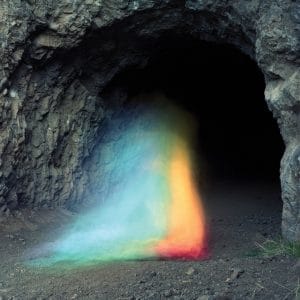 A couple of questions for you. Have your listening habits changed over a year in lockdown and isolation… and in that time, have you struggled more with getting a good night’s sleep?

Given the almost complete absence of live music the answer to the former question is likely to be ‘yes’. So too the response to the second question, as many people have reported bizarre dreams, broken rest or anxiety through the night. In A Deep & Dreamless Sleep, then, is a great title for Mint Julep’s fifth album, as it is one of many things we yearn to experience once again.

Given all that, it is ironic to report that the music on this album is incredibly dreamy. Dreamy to the point that, as a listener on headphones, you are borne away on a sonic cloud. Thick waves of keyboards surround you, the weightless feeling enhanced by atmospherics and sonorous bass lines.

Mint Julep, the Portland-based husband and wife duo Keith and Hollie Kenniff, worked instinctively on the music this time around, setting aside the traditional verse-chorus approach to work with something that sounds more improvised.

It is entirely appropriate that the record was created slowly, over several years, and its natural genesis is immediately apparent in the way the music lives and breathes. There are shoegaze influences aplenty, but not so many to be too derivative. Instead everything functions as an aural balm, soothing the listener with easy going but subtly animated riffs and textures, the consonant melodies looking outwards and upwards.

The consistency of the Kenniffs’ work is notable. Black Maps, with gently pulsing keyboards, has a softly enchanted air. Mirage has a lovely backdrop, panning out to the more distorted images on the horizon. The addition of analogue percussion sounds are a nice touch on Shores, adding depth and giving the image of shifting pebbles under walking feet. The track has an urgency and relative darkness but gradually gives way to contentment.

Westerly begins with a broken rhythm akin to an irregular heartbeat, which rights itself effectively as the song proceeds, while lights flicker on the horizon in the descriptive Longshore Drift. In The Ocean goes further, and you can more or less feel the spray of the waves when turning towards the source of the sound.

Mint Julep’s outlook tends to be dark around the edges, rather like the cover artwork, but there is always a point of light toward which the music moves. Rhythms flicker in the half light, while Hollie’s glacial voice is the ideal foil.

What a shame, then, that the words are not easier to hear. In fact, on occasion, they are impossible to define. This is partly because the vocal is placed further back in the mix, giving the keyboards and guitars an equal say in the lyrical picture, all of them painting delectable images. Yet the voice surely needs to come forward enough so that the words can be properly heard.

Despite this, In A Deep & Dreamless Sleep is largely a success, its overall poise and mood providing comfort and consolation. It is the musical equivalent of taking the weight off your feet, a work to soothe the fevered brow. Never mind the words, just lose yourself in the music – and good sleep will surely follow if Mint Julep become part of your listening habits.