Miracle Fortress – Was I The Wave? 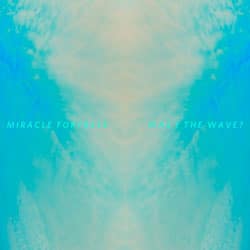 Was I The Wave? is the long-awaited second album by Miracle Fortress, essentially the musical project of Canadian Graham Van Pelt. His first release Five Roses was a dreamy album of perfectly formed, intelligent guitar pop and possessed a veiled sense of intrigue that drew lofty comparisons to such musical icons as Brian Wilson.

He appears to have undergone something of a musical reinvention however during the intervening years. The nuanced psychedelia-lite and refined power-pop of his debut have been replaced by a sound that is much more deeply rooted in the worlds of electronica and synth-pop. On Was I The Wave? guitars have on the whole been quietly stood down, and only make the briefest of appearances. The layered arrangements are still intact, but the low-lying melodies are not as evident, another casualty of his change of sound.

Tracks such as Tracers and Raw Spectacle seem to be more indebted to bands from the 1980s. Both borrow some of New Order’s melodic glide and early Depeche Mode’s polished, mirrored synth sheen. Van Pelt’s sun bleached vocals still grace the album but this time they sit on top of an undercarriage of effervescing beats and synth blocks rather than the electric guitar of his earlier material. It is an unanticipated, and in some ways an initially confounding change of direction, particularly so given he had carved out something of a personal niche in the somewhat overcrowded genre of guitar based music.

Four small instrumentals appear along the course of the album, which serve to break up the keyboard-heavy sound. It is these tracks that possess more signs of guitar, especially on Awe the short instrumental prelude that opens the album. Elsewhere, Everything Works signals a slight return to the Brian Wilson style of vocal melody that was present on Five Roses while Miscalculations is the stand-out track, swathed in a blanket of synths. It also offers proof that Was I The Wave? has bigger, harder hitting pop moments than its predecessor.

Was I The Wave? is a bold reinvention, and shows him to have achieved a level of progress in the space of one album that may have taken others two or three. Yet, there is still a feeling that this change may have occurred a little too quickly, and on the whole the album falls slightly short of the leap in quality promised on his first outing.