Mirel Wagner – When The Cellar Children See The Light Of Day 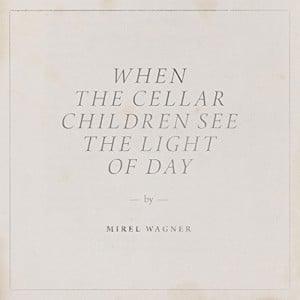 When Finnish singer-songwriter Mirel Wagner’s self-titled debut was released in 2012, it felt like hearing some dusty, unknown gem from out of the ether. Barely in her twenties, Wagner seemed to arrive fully-formed, with an aesthetic and confidence that spoke beyond her actual age. Two years later marks the arrival of the follow-up, When The Cellar Children See The Light Of Day, a successful continuation and expansion of her unique and raw style.

Wagner’s voice is wrapped in Northern European angst and the Mississippi Delta, like Robert Johnson’s daughter crossed the Atlantic and sang Billie Holiday numbers in a grunge band. It’s less about sheer technical ability, more phrasing and intonation, and all gut-level croon. When she sings “I want to make babies with you” on the yearning, plaintive Tall Trees, a chill runs up the spine. Her guitar playing compliments her voice perfectly – idiosyncratic, physical, and doused in feeling.

The 10 songs are all good. They are not mathematically constructed, but strange flashing streaks of beauty that entrance while walking the fine line between mystery and obtuseness. They are open enough to interpretation that the listener can project their own reality into the songs and create internal dialogues, but avoid any attempt at universality that so often leans to cliché. It’s not blues, it’s not folk, it’s the moans of a heart set to guitar. Every song is an account of pain, lust, love, dreams, memories, and regret, and each one resonates because they evoke deeper truth. What more detailed and fitting description of desire than the line that goes “I’ve climbed three thousand stairs just to give you a kiss?”

The slight grunge vibe to the opening lullaby 1 2 3 4 has Wagner whisper-singing the ominous refrain “one, two, three, floor/ what’s underneath the floor?” The blues of The Dirt is pure Leadbelly, full of rhythm guitar and Southern Gothic zen koans. Ellipses is sad, and can be encapsulated with the observation “You’re laughing the loudest/ But your smile don’t reach your eyes.”

Oak Tree is a ballad with a narrative that doesn’t resolve or make much logical sense, all about the lovely, ghost-filled chorus and surreal images, and brilliance strikes on In My Father’s House, a tense confession in the poetic tradition of My Father’s Waltz, backed by a simple chord progression and sorrowful lyrics. One of the strongest tracks on the album, Wagner’s voice glides as she sings “Up in the chimney/ down in the cellar/ there’s a terror and it hides/ my Father’s House/ here in my father’s house.”

The flamenco infused, Spanish Caravan-reminiscent Dreamt Of A Wave has Wagner delivering lines in her most sinister, dirge-inspired voice. “Dreamt of a wave washing over me/ I dare not speak its name.” This is followed with The Devil’s Tongue, a vow to follow someone who’s wrong but talks so good. The doomed relationship examined in What Love Looks Like is comprised of lists of dysfunctionally relateable behaviors, always ended with “Is this what love looks like?” The emphasis on the last constant of “like” might be perceived ironic if it didn’t sound like it hurt so bad.

The album finishes on a high note with the lovely Goodnight. Wagner whispers over an unnerving lullaby melody, strings and guitar softy moving while a dreamy piano burns out a sorrowful songs. Despite all the darkness, a sliver of light seeps through with the uplifting, poignant final words: “Tomorrow, tomorrow, we’ll be alright/ Together, forever, now and through time.”

With a resurgence of interest in Folk and Blues in the past decade from artists of varying levels of influence, popularity and talent (Mumford and Sons, The Civil Wars, anything Jack White does, &C.) and the lone singer-songwriter straddling between the ornate, ’70s-remiscent efforts (Beck’s Morning Phase, for instance) and stripped DIY offerings of sad, sad crooners like Keaton Henson, Wagner clears her own path. She seems to have come out of a different world, one without posturing or artifice, and captures the soul of the blues, and all that lofty tradition entails, like a master. Simply put, When The Cellar Children See The Light Of Day is one of the best albums of the year.