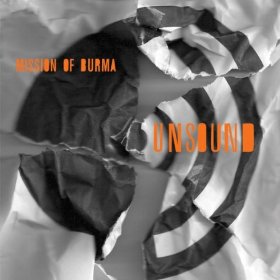 Like Public Image Ltd, renewed, revived and relevant, on Unsound Mission Of Burma don’t sound like an old band. This is a record that could have dropped through the time stream direct from 1981 when the group dropped Signals, Calls And Marches, its first EP, featuring the classic That’s When I Reach For My Revolver.

That’s not to say that Mission Of Burma haven’t developed, but rather that they burst into life with a pretty defined sound and approach to the world. And nobody is suggesting that chocolate ice cream needs a radical new direction. Roger Miller had to curtail the original run of Mission Of Burma releases due to tinnitus. He’s still going though. That’s commitment.

Unsound is a smile-inducing slab of post-punk awesome. Dust Devil opens the record with an amphetamine twitch, printing the myth in 500 point font straight onto your retina, playing your ear drums like a mad medical experiment. The title of Semi-Pseudo-Sort-Of-Plan sounds as if it was pulled from the band’s mission statement while musically it could easily fit on any of the band previous records. Vocals, drums, bass and effects are all tied together so tight you have to strain to even get near the lyrics. It’s beautifully intricate and, at the same time, immediate: “Beware of vast improvements…”

Sectionals In Mourning begins with brutally basic bass before the rest of the band clatter in, tape loops slipping and sliding behind them. It’s the sound of a drill instructor after his coffee was spiked with LSD – ie. wonderful. The twitching, Morse Code guitar of This Is Hi-Fi is immediately joined by almost tribal drums and megaphone vocals. It is utterly beguiling. It feels as if Steve Albini has popped round with a home hypnotism set.

Second Television, Part The Sea and Fell–>H20 form a trio of big, brash songs where guitars and vocals assail you from all sides. Live these tracks will knock you off your incautious feet. Add In Unison is as close as post-punk gets to showcasing a guitar god with Miller wringing out brain-bending sounds from his guitar and the drums clattering afer him like clumsy bouncers chasing punks through a bad regional night club.

7’s genuinely sounds like a great lost song from 1979. Without the liner notes before you, it would impossible to tell what era the tune came from. The same goes for What They Tell Me and the mischieviously named Opener, which closes the record.

Mission Of Burma have never stopped sounding vital, never stopped making music that provokes, challenges, empowers, enrages and amuses in equal measure. Do we really have to tell you to buy this record? Miller sacrificied his goddamn ears for you.

Mission Of Burma MP3s or CDs

Mission Of Burma on Spotify