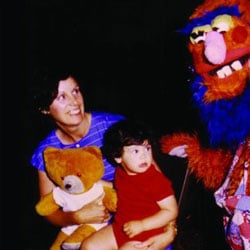 Psychedelic Brummie funsters Misty’s Big Adventure take their name from a Magic Roundabout story, and such an origin is apt for such a colourful far-out gang of musicians. Their latest album is a collection of playfully odd songs that make an instant impression regardless of your taste.

Misty’s are a band that really need to catch you in the right mood. Their endearing musical approach will put you off if you want something moodier, despite the hints of depression counselling in the lyrics, but for the most part the songs are strong enough to set toes tapping. Album opener Aggression is a basic SKA state-of-the-nation stomper which is more I Predict A Riot than Ghost Town. But suddenly Mickey Mouse sees us in ’60s Burt Bacharach territory – its whistle-along refrain of “We’re sick of your dreams Mickey Mouse” is difficult to ignore, even if the sentiment behind the song is a little naive.

The middle section of the album jettisons the easy listening and the pace gets bogged down with more experimental musings. However, if you were to strip away the vocals and their jaunty veneer you’ll find that the instrumentation contains more depth than is initially obvious. Misty’s evoke The Zutons and the psychedelia of early Super Furry Animals, and though this might make them sound a little behind the times, they use their skills well enough to cause something of a cult following. Not everything about this album works, but it would surely be more of a blast live.

Stargazer Patrick Moore appears in a small role during the fairground carousel of General Confusion and narrates a portion of the song in probably the oddest cameo since Stanley Unwin spouted gobbledegook on Small Faces‘ Ogden’s Nut Gone Flake. It typifies the sense of quirky British eccentricity that runs through the entire album. There’s a constant feeling that Graham Chapman might pop up in full military regalia telling us how silly we’re being.

Towards the end of the album the pace returns and we’re treated to some wonderfully well-crafted songs. Queen Betty tells the heartwarming story of an elderly matriarch while Just Another Day is a perfect slice of candyfloss pop. The closer, A Long Line Of People, is a perky anthem that also doesn’t put a foot wrong.

This album is a lot of fun, but its scattergun approach can sometimes be frustrating. Half of their audience will probably want to dwell on the moments of psychedelic free-form freakery; the other half will prefer to enjoy their tightly polished pop whimsy. The band perform both sides of the coin equally well and are clearly enjoying themselves, but Misty’s prove a difficult beast to pin down and there’s definitely a hint of Marmite in among the bubblegum flavour.