Mitski – Be The Cowboy 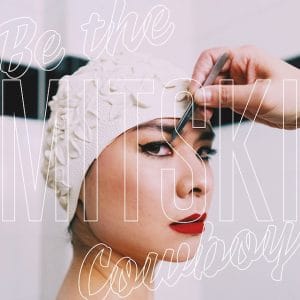 Channeling the rootlessness and lonesomeness which came from an itinerant upbringing (“If I attached … I’d have to detach,” she told the New York Times; “[so] I just kind of floated above”), Mitski Miyawaki wrapped up alienation, failure, lovelorn longing and the assertion of cultural identity in the 11 songs on her fourth album, released in June 2016.

She called it Puberty 2, pithily capturing the irony of conquering adolescence only to continue fucking up well into young adulthood and beyond. And in capturing it, hopefully going some way towards defeating it.

A similarly targeted, self-disparaging wit surrounds the naming of the excellent Be The Cowboy. “It started as a joke for myself,” Miyawaki says. “I would tell myself ‘be the cowboy you wanna see in the world’ because there was an artist I knew in college who just had this sort of cowboy swagger on stage … I was like, ‘I should just be that cowboy, I should just be the thing that I admire.”

For all its heartache, Puberty 2 wasn’t a quiet album. Your Best American Girl’s caustic apple pie sentiment was bolstered by a suffocating wash of distortion, while the lacerating My Body’s Made Of Crushed Little Stars – as succinct and brilliant a distillation of the doomed YA worldview as it’s possible to imagine – added a thick coating of fuzz to both the acoustic guitar and unhabitually ragged vocal.

This time, Mitski was keen to avoid “repeat[ing] myself or unintentionally creat[ing] a signature sound”. Instead, Be The Cowboy showcases over 14 tracks an artist who – along with producer and chief collaborator Patrick Hyland – rarely takes an obvious route to anything. Puberty 2’s only four-minute plus song was far and away its weakest, but here the songs are short, richly melodic, with layers of detail packed in – like super-compressed sad-pop bombs – and topped by Miyawaki’s vocals, at once commanding and plaintive.

It’s all there in Geyser, as turbulent an opener as its title suggests, which bursts from an ominous drone and a warm, cosying verse into a tempest of a bridge and chorus, wearing the scars of a destructive relationship with the creative urge (“Hear it call to me / Constantly / And hear the harmony / Only when it’s harming me”). Why Didn’t You Stop Me, next, shifts up several gears into the slightly wonky, synth-driven pop mode which appears throughout …Cowboy; it’s echoed much later on by the almost Katy Perry-esque (although Perry by way of Pixies) Washing Machine Heart.

Similarly ‘up’ are Remember My Name – also sharing prickly, rumbling DNA with Black Francis et al – and the sardonically jolly, horns-and-piano laced poison fruit of Me And My Husband. Best – and certainly funkiest – of all, there’s Nobody. As sad as anything she’s recorded to date, it was written during a solo stay in Kuala Lumpur, so lonely that she “open[ed] the window / To hear sounds of people”. It’s a sadbanger sans pareil: disconsolate disco with not one but two modulations, sending Mitski’s voice, imploring, heavenward.

Elsewhere, there are plenty of slower, sadder moments – those plummeting chord changes that drag your heart from your chest and gently squeeze. “I’ve kissed you before, but I didn’t do it right,” she sings on Pink In The Night; “can I try again?”. She’s not always so plain-spoken: A Horse Named Cold Air is as jarringly quiet as it is inscrutable, while when the open-ended dream-pop of Blue Light asks “Are you that blue light?”, she could almost be waiting on a siren or a smartphone screen.

Closing, the gorgeous Two Slow Dancers – sitting alongside Puberty 2’s I Bet On Losing Dogs as Mitski’s most direct, affecting ballad – is a heartbreaking glimpse, still floating above it all, of the other end of adulthood. “It would be a hundred times easier / If we were young again”, the dancers sing over gradually rising and fading synth lines; “And the ground has been slowly pulling us back down / You see it on both our skin”.