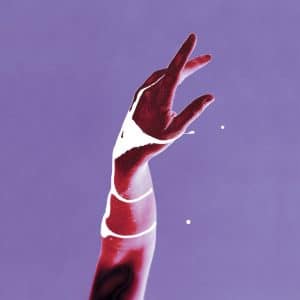 Sour Cherry Bell starts as it means to go on: from the first reverb-laden vocal on Lowlight and the first distorted, droning bassline it’s clear that this is a record of modern-day shoegaze, heavy yet dreamy and ethereal at the same time.

The record does not rely on percussion for its sonic impact, as it’s reduced to echoey background noise in tracks like Cherry Bell Blacktop and The Steelyard. Instead MJ Guider lets the synth layers congeal into a fuzzy mulch as unintelligible lyrics float over the top, a formula that remains so constant that the album often sounds more like a suite than a collection of standalone tracks.

When elements are parsed within the audio stew they certainly impress, with Body Optics’ five-note ascending synth motif clashing interestingly with the track’s steady throbs of bass, but this approach feels beside the point. The album’s main purpose is to overwhelm the listener with the sheer scale of it all, rather than win them over on the detail. The exceptions to this style are refreshing, as Perfect Interference’s piano has a mystical quality and an elegance that’s out of kilter with the rest of Sour Cherry Bell, while Quiet Time’s motorik beat gives the tune rhythmic propulsion not often heard on the record.

The vocals are functional, with an odd deadpan quality reminiscent of Laurel Halo’s performances on Quarantine, and they compliment their accompaniment nicely. A wall of sound approach always runs the risk of overkill, but the changes of timbre and mood from, for example, FM Secure’s subterranean bass to Simulus’ staunch, blaring pads keep the album moving along nicely. Packed with oodles of overdrive and a dissociated, ambient feel, Sour Cherry Bell is another enjoyable release from an artist who is rapidly reaching the top of the dream-pop scene.