by Ben Hogwood
published: 18 May 2020 in Album Reviews
Tweet 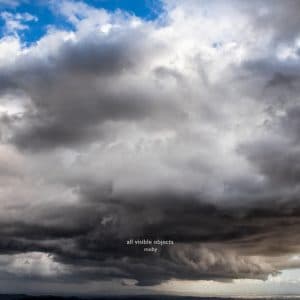 Moby may have travelled far in his career of 27 years to date, but the music of 17th album All Visible Objects brings him back to source. Through that time he has consistently championed animal rights, while more recently his fierce opposition to a certain Donald J Trump has also found an outlet in his music. Meanwhile alongside the album releases two sets of warts-and-all memoirs have done equal parts damage and good, revealing the trappings of celebrity status but leading to uncomfortable friction with some of his subjects.

For now the personal acrimonies seem to have passed, and the focus turns global again. When Everything Is Wrong was released is 1995, Moby included liner notes attacking the Western world and its treatment of animals and the environment. Now, a quarter of a century on, another essay is included, with all proceeds from the new album going to charitable organisations – one for each of the 11 tracks. It is in effect an acceptance that not only is everything still wrong, but that a redoubling of efforts is required. Between them the causes stand up to the tyranny of leaders, while furthering the work of organisations such as The Good Food Institute and Animal Equality.

Somehow the music Moby chooses as benefactor could also hail from 1995. While on occasion a little nostalgia can be a powerful thing in electronic music, much of the hour of All Visible Objects is spent in time travelling rather than mere recollections. There is heartfelt music here, for sure – and when the stars align it can shift the heart of the listener. The floated piano line of My Only Love is particularly beautiful, stretching out like the keyboard in Porcelain only extended for longer, coming slowly down to earth like a feather after a strong wind. Refuge is also deeply poignant, a mellow keyboard line complementing the thoughtful vocal pondering the destruction of the Amazonian rainforest. When the causes and music align with Moby, music of intense emotion is the result.

By complete contrast, Power Is Taken is full of rage. The song stands firm amidst the whistles and alarms, honing in on its anger through a line recited by Dead Kennedys drummer DH Peligro. “We who hate oppression must fight against the oppressors,” he proclaims. “Power is not shared, power is taken.” Unfortunately this fighting talk is twinned with a crass-sounding set of dance music clichés, reaching for the sky but ultimately falling short, the revolution on pause. Rise Up In Love has similar issues, its big drums and soaring keyboards supporting a sentiment that, while worthy, sounds curiously empty and disconnected.

While those songs aim for dancefloor abandon, Forever – in support of The Humane League – has a defeated air. Its plaintive language suggests music written around the time of previous album Everything Was Beautiful and Nothing Hurt, but it does not have the resolve of its predecessor. “Is this the way it must be forever?” asks the vocalist. “What are we supposed to feel, what are we supposed to do?” It is a lone and fragile voice rather than the choir Moby worked with in 2016.

The isolation of Separation, on the other hand, feels almost unbearably relevant to our current lockdown plight. While it is all too easy to look for these parallels in recently released music, Moby tells a poignant story of emotional distance through plaintive piano and remote synthesiser pads. The title track responds to this with a more positive message, ambient piano drifting over four to the floor beats once again.

From this you will gather that, while All Visible Objects has a lot of powerful things to say, its musical messages do not always find the core of its emotive lyrics. When it hits the spot, Moby’s writing is still subtly powerful, but when it doesn’t a curious and lasting emptiness remains. This may accurately reflect the imbalances of the world, but as a musical work it ultimately feels off-kilter.