Mogwai – Hardcore Will Never Die, But You Will 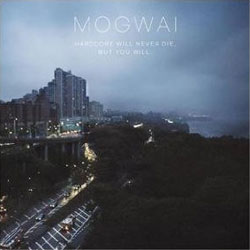 It’s nearly 14 years since Mogwai first claimed to fear Satan, but now it seems as if they are fearful of no-one, not even death itself. Hardcore Will Never Die, But You Will is the defiant claim from the band’s seventh studio album and it is starting to look like Mogwai have something of the eternal about them too. Perhaps not so much drinking from the fountain of youth (although much of the band is still only in their mid-30s), but supping from the chalice of wisdom, understanding that trends and fashions in music are fleeting, but noise is everlasting.

If there were a Darwin’s Theory of Evolution for music, Mogwai would be the crux of the argument. They are living proof that evolution is a slow but unambiguous process; without doubt a band with a changing sound, but the transformation is so deliberate that in the year 4056 they just might have developed into a drum and bass outfit. So it will come as no surprise to hear that the album kicks off with a track named White Noise. However, what may shock is that the screeching guitar distortion that we have come to know and love about Mogwai remains at the back of the mix on this particular song, giving way to some rather uplifting piano chords. It’s a fitting start to an album which alters its form subtly throughout.

Mexican Grand Prix begins with a pulsing electronic drum-beat, James McNew style organ playing and a very New York garage-rock bass line, whereas Rano Pano indulges in some pretty dirty sludge-rock guitar lines contrasted with whimsical electronic synths. It appears that Mogwai are eager to showcase their new ideas within the first few tracks of this release, eager to prove they are still a band with plenty of fresh concepts.

Hardcore Will Never Die, But You Will isn’t all about presenting an aural bombardment of apocalyptic proportions though, for Mogwai are without doubt a band capable of more tender moments. Despite taking great delight in shattering the eardrums of punters at shows, tracks such as Letters To The Metro may just offer enough respite for the tinnitus to fade momentarily. This track, the album’s centrepiece, possesses all the melodic splendour of any other Mogwai track, but with all the distortion stripped from its bones. Sparse bass notes hover low beneath the song as piano chords rise and fall on the back of a lusciously played slide guitar, all while Martin Bulloch reigns in his drumming to perform a simple but effective groove.

And what would a Mogwai album be without the final track being the longest, most grand and ridiculously named song on display; You’re Lionel Richie ticks all three boxes. At first seeming fairly uplifting, with watery guitar riffs and bright drumming, the song soon becomes built upon the tension of sparseness; a lone guitar and eerie background echoes captivate the listener. Suddenly, from the back of the mix, a fuzzy guitar note rises in prominence and it becomes fairly obvious what’s coming next. The distortion pedal is stomped, the cymbals begin to crash and all manner of guitar and electronic feedback begins to prevail. The dark at the end of the tunnel.

Like the Sumerian Kings who lived and reigned for hundreds of years, Mogwai are starting to look like British rock royalty themselves. You and I may die, but we can all rest easy in the knowledge that not only shall hardcore never die, but neither shall Mogwai. Long live the kings of post-rock noise.