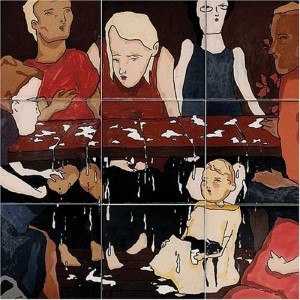 With a successful recent week at London’s ICA behind them, a date at the Albert Hall coming up and now a sensational new album, things are looking rosy in the garden of Mogwai.

There were lots of rumours regarding the sound the Scottish guitar band would adopt for the follow-up to 2003’s Happy Songs For Happy People. Most of these rumours appeared to indicate a return to the heavier sound of earlier releases such as Young Team.

In reality, despite the fearsome title, Mr Beast is an album that is not so much a departure from Happy Songs as a progression. Of course there are moments of bone-crunching intensity, but when has there ever been a Mogwai album when that wasn’t the case? In the main there is actually more space to think on this release than in any from their entire catalogue.

If ever there was a ‘typical Mogwai track’ then the opener, Auto Rock, would stand as a fine example. Rising from hushed echoey piano to single-beat funeral march drums and then finally a crescendo of guitars, the majestic nature of the wall of sound we arrive at is enough to give you goose bumps.

The curiously named Glasgow Mega-Snake is one of the few outand out rockers on the album. This one went down a treat when it was played at the ICA and showcases Mogwai at their punishing loudest. The multi-layered sound presented is repeated again later on the albumin Folk Death 95, with a fusion of guitars, electronics and drums.

Both Acid Food and Travel Is Dangerous contain that rarity ina Mogwai tune – vocals. I’m not going to be the one to tell him,but Stuart Braithwaite isn’t the best singer in the world. Despite that, his Scottish mumbling does get across the feeling you gather it was intended to do. On Acid Food it is a mournful mode – a song with a bit of an electronica feel and, dare I say it, even ahint of country at the end with some slide guitar. And yes, I did say country.

Travel Is Dangerous, meanwhile, is a song with a much heavier feel to it, and although it is impossible to decipher the vocals (which do have a hint of Metallica‘s James Hetfield about them), they get drowned out anyway by the blistering guitars on this killer tune.

One thing that has been noticeable about the Mogwai of recent years has been how much of an increasingly large role piano is playing in their music. The reflective Team Handed and Emergency Trap are both essentially piano-based tracks with guitar and drum accompaniment. The latter in fact has a sense of a love song about it, although maybe that’s pushing things a bit. This is doom-mongers Mogwai we’re talking about after all.

A clear highlight among a list of highlights would have to be Friend Of The Night. The single which preceded the album, and reached nosebleed territory of 38 in the charts, is the most melodic track here and again is very much piano orientated. A very emotive tune, it is already a fan favourite and is sure to become a staple of gigs for years to come.

Penultimate track, I Chose Horses, has a last song feelabout it. The instrumentation sounds as though it is beingplayed underwater, while the number is also noticeable for the spoken words in an unidentified foreign language. It’s not clear at all what the guy speaking is saying, but whatever it is, it fits in nicely and is almost certainly not about the state of Scottish football.

That just leaves We’re No Here and – brace yourselves folks – because oh my God, here comes Mr Beast! That’s the feeling you get as the final track steams in like King Kong stampeding through Glasgow with mighty lumbering steps, steps you can be sure these big Celtic fans have made sure leave Ibroxstadium nothing but a pile of rubble. A cavalcade of guitars jacked up to full volume, this is the ending to end all endings – rounding off a superb album in the most fitting Mogwai style possible.