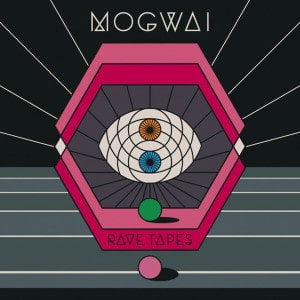 Since they exploded (brutally, then gently, then brutally again) onto the scene in 1997 with Mogwai Young Team, Mogwai have outgrown the post-rock label they were initially daubed with. Those taking the title of the band’s latest album at face value should be warned; Mogwai has not turned towards dance sounds for this release. Depending on what you want from them, this may come as a disappointment.

Yet Rave Tapes is different from previous Mogwai albums, and it is a rather strange and complex beast. It is perhaps the most immediate and musically diverse album they’ve recorded. It is also arguably one of their darkest records, which, coming from the band that supplied the score for Les Revenants (the creepiest Zombie drama conceived, and rightly vaunted as a piece of majestic television) is something of an achievement.

Of course, it was always likely that some of the influence of their experience with Les Revenants would rub off a little, and certainly there is evidence of it to be found in the darker corners and the repetitive motifs that pepper these songs. It’s this last facet of the album that makes it the most accessible so far, of course there are moments of (more than welcome) indulgent sprawl, but the riffs and hooks are more obvious this time around, providing anchors and signposts for those likely to lose their way in the dark.

The old quiet/loud/quiet/LOUD template has been eroded over time to the point where Mogwai are no longer trying to lull their listeners and then bludgeon them. Instead, they let the songs develop naturally, and if that means they meander gently then so be it. This is in evidence with Heard About You Last Night, a deceptively delicate opening track that initially does little to grab the attention. Given time however, its sedate charms become apparent. An insistent guitar riff wraps around what might be a xylophone. The drums, low-key but driving, keep pushing towards a disconcerting synth part coupled with a piano refrain that sounds like summer rain. It’s all there, the push and the pull, the beautiful and the ugly; a perfect summation of the album as a whole.

Simon Ferocious steps things up a little with a repetitive keyboard loop providing backing to waves of guitar noise. It perhaps outstays its welcome rather quickly lacking invention and direction, but nevertheless retains a darker, almost robotic edge that is hard to shake off. Remurdered follows and could easily be a Les Revenants offcut. Starting with brooding ill-omened synths, it’s an unsettling affair to say the least but the real violence is kept for later when the synths take on a violent, serrated edge leaping from the shadows, Serge like, and confirming the fears created in the opening segment.

Hexon Bogon’s brief but powerful return to post-rock territory feels a little by the numbers, but is a start reminder that Mogwai are still capable of kicking up a storm when they need to. Master Card plays a similar trick, but with a hardcore edge, which as we all know, will never die. Deesh meanwhile is the epitome of restraint, it is the sound of an electro-army preparing for war, in slow motion. The instrumentation may have changed, but Mogwai are still masters of the slow burning emotional release.

Repelish utilises the ramblings of a man who fears Satan and his presence in Stairway To Heaven whilst Mogwai create an uneasy, but laid back siren call of layers under his words. Being Mogwai, they artfully change the context of his monologue from one of concerned outrage to satanic cheerleader. “You’ve got to live for Satan” seems quite reasonable by the song’s close.

They save the best for the last however, and the genuinely touching No Medicine For Regret is capable of making even the hardiest weep. A beautiful motif is repeated and expanded on as it becomes enveloped by squalls of guitar. It’s underpinned by bass synth that somehow possesses a kind of human warmth. The same can’t be said for closing track The Lord Is Out Of Control, which is a swirling vocoder lullaby that could easily have replaced HAL’s stab at Daisy Bell. Despite the human voice, it retains a considerable emotional weight.

Rave Tapes might not be a complete change in direction for Mogwai, but it is different enough to suggest that there’s plenty of inventiveness left in the band yet.