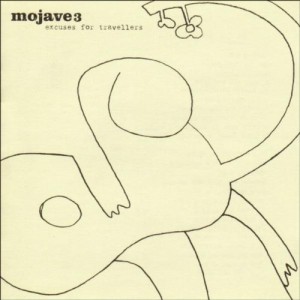 From the opening track onwards, Excuses For Travellers, Mojave 3’s third album, worked its way into my soul, almost seeped it’s way in there. By the end of my first (of many, continuing) hearings of this album I was smitten. It is difficult to find fault with such a beautifully crafted work which is not only obviously heartfelt and technically perfect but which has at least three excellent single-worthy tracks. I love this album, in short.

Principal songwriter Neil Halstead‘s vocals take on a serenading quality in several of the songs, most of which are based on simple structures and most of which are, whether the band wish to admit it or not, broadly country songs. “I know we get tagged as a country band,” Halstead bemoans, “and I can understand why, totally, but we never started out attempting to be a country band. In fact, it doesn’t even feel like we’re a band at all, in some respects – we’ve all got jobs. Basically we just wanted to write simple songs.”

The recording of said songs has been aided immensely by the choice of instrumentation, including ukelele, pedal steel guitar, electric and acoustic guitars, bass, drums, Hammond XB1 and vocals (including bassist Rachel Goswell’s beautiful lead vocals on the song she wrote, Bringin’ Me Home). It all sounds thoroughly wholesome and authentic, somehow.

The next single, Return To Sender, might see the band compared with Stereophonics rather than the usual comparisons with Nick Drake (is anyone not compared to him nowadays?), Bob Dylan (Halstead’s voice is infinitely superior) or Cowboy Junkies (fair enough). It is a ragtime affair, with three chords to it’s name, with seemingly an entire campfire of surfers singing backing vocals over a ukelele and all manner of other wonders. It is more upbeat than the first track of the album (already released as a single), In Love With A View.

Halstead, unlike the rest of the London-based band, lives in Newquay, Cornwall, the UK’s surfing capital. It seems that the lifestyle of the surfer/songwriter has been pervading Mojave 3’s music for all three of the currently released albums, for on their first, Ask Me Tomorrow, you almost expect sampled waves to splosh over the guitars. Idyllic, captivating, quite lovely, Mojave 3 will take away any anxiety you have and make you think about what really matters in life. They don’t moan at you and they don’t shout at you – they just ask you to listen. This is exactly what you should do, at the first opportunity, to Excuses For Travellers.