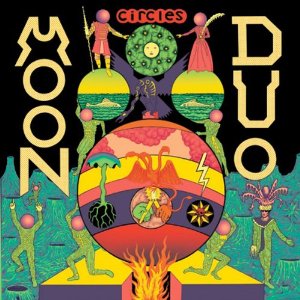 Artists of the psychedelic persuasion are not often thought to be the prolific type, but genre-bending San Franciscan noisesmiths Moon Duo are on something of a roll. Circles, in fact, is their third LP in three years, and guitarist Ripley Johnson has a further five albums to his name since 2007 as one-quarter of space rockers Wooden Shjips.

So is the well inevitably running dry, or are Johnson and bandmate Sanae Yamada simply striking while the iron is hot? For that matter, how many more miles are left in fuzz-laden, chemically-enhanced krautrock odysseys? Isn’t the idea simply to hit upon a riff and repeat until profound?

Not exactly. Circles is muscular from the outset, with opening track (and lead single) Sleepwalking careering forth like a Screaming Trees number, relentless kick-drum, sitar tracks and bruising licks intact. It’s a touch sinister – as are most of the pair’s efforts – but also strangely vibrant, fresh, and full of suggestions that Moon Duo’s noggins are home to ideas aplenty.

Follow-up I Can See is a touch more portentous, its titular refrain serving as one of the album’s more decipherable sentiments. Hints of an overdriven brand of dark wave reverberate vividly, but it remains a track that utilizes almost exact same formula as its predecessor. It’s a pattern that lasts: the title track ushers in a few pop-oriented alterations – and even a chord change or two – but then refuses to budge from its pitch, much like its stubborn trackmates.

Moon Duo may be renowned for their experimentation, but theirs is a type of noisemaking that sits steadily on rails: tracks lose no time in signalling their intent, running through their gamut of ideas within a few bars of beginning. The affair crescendos, a handful of elements emerge, but the pair deviate little from their chosen path.

On one hand, it’s mesmeric. Efforts like I Been Gone are spacey-yet-entrenched, ploughing a lone furrow until the ear reaps what has been sewn: hypnotic grooves threshed by gigantic gain pedals. On the other hand, there is frustration: despite the mammoth sounds exhibited, there’s an unmistakable air of straitlaced steadfastness.

But highlights remain. Sparks adopts an acoustic touch or two – dappling light among the album’s many shades – and even ushers in a slightly demonic-sounding solo among the many other garish elements of its multicoloured canvas. There’s something Queens Of The Stone Age about it – if only their simpler, garage-flavoured origins.

There’s little doubt that Moon Duo are masters of their sound (goodness knows they spend enough time in the same groove), but it strikes an odd chord that they should take their psychedelic tastes and be so straightforward with them. It’s like letting Dead Mellotron into your state-of-the-art studio but allowing them only one idea per song.

Circles is by no means bad – and there are those who will find it great – but it all too often feels like butter scraped over too much bread. One wills Johnson and Yamada to be freer with their talents; more adept at freewheeling; more inclined to change pace now and then.