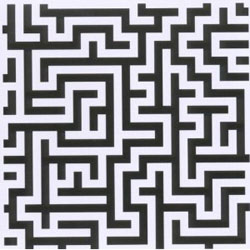 Moon Duo seems like a partnership that arose out of the simple aspirations of idolized replication. The two musicians involved have devoted themselves to a clear-cut venture on experimental grinding stone; especially Ripley Johnson, whose day job is shredding for the curiously revered San Francisco psych-space collective Wooden Shjips. Over the last couple years he has been joined by Sanae Yamada as Moon Duo, a side project emphasizing the ‘krautiest’ of their obsessions.

As such Mazes, their first full length effort, is structured like an odyssey, tunnelling the listener under a heavy canopy of what else but acid-burned guitars, primordial drum machines and plonking, psychotropic synths. You just don’t hear many records like this anymore.

Of course there is a reason for that, as the zonked sharpness of Moon Duo’s unrefined psychedelia sounds at once nostalgic and anachronistic. The brush fire, five to eight-minute drone jams come from a variety of influences, none current, and the duo themselves name off several record-collector icons like Cluster, Suicide and Silver Apples as sources.

It all shines through. Johnson’s guitar is bounded like a thunderstorm, at once enveloping and attacking in a thick, buzzing haze; he cascades malformed solos through songs like Seer and Run Around, but restrains into amniotic noise on Scars – both developed and competent, but still heralding back to the genesis of experimental rock. Yamada slams her keyboard into organ sounds, like her forbears coming across with the stark barbarian simplicity that so helped define her musical heroes. It’s hard to criticize the duo for redundancy given how perfectly they craft their impression, but its aged demeanour can be problematic, almost coming off as novelty in the grand scheme of things.

Mazes’ most positive quality is its approachability. Given they are a spin-off of an acid-rock quartet with a cultish following, Moon Duo could have ended up appropriately diffuse. But the tunes stand for themselves, capturing the echoed, populist beauty of psychedelia before it spun deeper down its own rabbit hole. It grooves, it swells, it peaks, it even dances a few times, with Ripley and Sanae not afraid to have a little fun, the energy inflicted on their jams immediately infectious, doing the right thing and letting the art take care of itself.

Does Mazes smash boundaries and promote Moon Duo as an iconoclastic beacon into a new era of psychedelic rock? No, but in fact it probably does the opposite; centring them as mere revivalists. Yet that doesn’t prevent an enjoyable record from being, well, enjoyable.