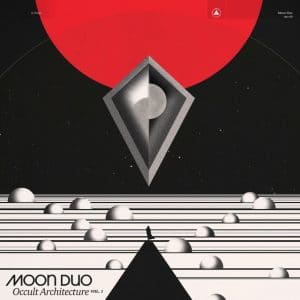 Moon Duo have always sounded like a bigger band than they are. They started out as a Wooden Shjips side project, with Ripley Johnson on guitars and Sanae Yamada – Johnson’s wife – on keys. Initially much more lo-fi than Wooden Shjips, they remain a two-piece but their sound has subtly expanded. The duo are particularly skilled in putting up a wall of fuzz that sounds like it might have taken several more musicians to produce, but which is presumably the product of lots of distortion and overdubs. With their new record Occult Architecture Vol 1 that sense is as great as ever.

The Vol 1 in the album’s title isn’t simply an affectation. This is in fact the first of two Occult Architecture albums that Moon Duo intend to release this year. They have spoken of the two records in terms of yin and yang, and darkness and light; volume one is the darker of the two, released appropriately enough in winter, and we can assume that volume two is set to follow in summer.

It will be interesting to hear what devices Moon Duo use to imbue volume two with qualities of lightness, as Occult Architecture Vol. 1 isn’t really a step-change for the band in terms of darkness or weight. Their usual hallmarks are all present and correct; uncomplicated rhythm sections, swirling psychedelic shadows, claustrophobic synth effects and guitars that flit between heavy chords and playful riffing, almost always following the same tone.

Where we do find a slight change, and perhaps a venture into slightly heavier territory, is in the duo’s willingness to stick with an atmosphere for more time. The album contains only seven songs and track lengths are on average somewhat longer than the Moon Duo average. Opening track The Death Set rides along on its groove for five and a half minutes, but then, just as it fades out a new, more anxious beat appears and the track reignites for a final minute. “There’s a sound in my head,” Johnson repeatedly intones during this section, and he’s clearly prepared to keep the track going until he’s let it completely out.

Some of the track titles are suggestive of darker, almost metal terrain, specifically Cult Of Moloch and WillOof The Devil. In the former, the main guitar riff does have a hint of metal to it, and it’s only flashes of Yanada’s synths that intermittently lift it away from the fire and brimstone direction it seems to be heading in. Will Of The Devil feels a bit more B-movie soundtrack – entirely in a good way. It’s big spacious beat and skittish synths give it a gothic pop vibe that’s only taken further by the bold guitar solos that come as if in place of a chorus.

As this suggests, this ostensibly wintry album has its lighter moments, even if they are hidden behind a veil. Closing track White Rose is a case in point: it opens with ominous, storm-like noises, then a frantic beat and bassline appear, and doom-laden guitar and keys complete the scene within the first minute. But the melody line is really quite sweet, and little stabs of more delicate synth bubble up between verses. With a ten-minute duration, the track does have time to switch between different moods, but its overall effect is that the album ends on a high.

The arrival of Occult Architecture Vol 2 later this year will mark another moment of judgement, when Vol. 1 can be assessed in its full context. But for now, it’s a worthy instalment in the Moon Duo canon and a fine record on its own terms.