Moonbootica – Our Disco Is Louder Than Yours 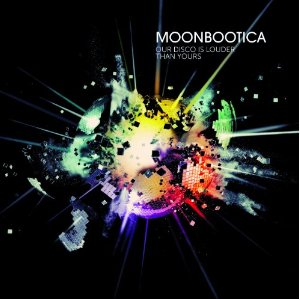 The best house records are an assault on the senses. Hamburg DJ duo, Kowesix and Tobitob, aka Moonbootica, deliver just that on their fifth album Our Disco Is Louder Than Yours. If you’re het up on defining genres, the pair make a meaty gumbo of electro-house, funky house and French house. If you’re not, what you get is euphoric synths, driving baselines and judiciously picked samples and guest spots.

A soulful vocal sample and pulsating bass line kicks off the record in the form of the short but sweet Our Disco Is Louder Than Yours, a call to action in 1:39. It’s swiftly followed by the duo’s recent single, the not-entirely modest, Iconic which picks up the pace and drops heavier beats into the mixer.

The record really starts to hit its stride with Tonight which couples a tune that oddly recalls French house heads Stardust with a insanely catchy and mildly offensive vocal loop – “We came here tonight to get retarded”. It’s a huge tune that sounds best pumped through big speakers or a pair of great DJ headphones.

Hamburg, Not Cheeseburg, the charmingly-named track that comes next is little more than a sketch, highly cut up vocals combined with heavily filtered bongos and insistent baseline. It’s nice but you can’t help wishing Moonbootica had made a proper song of it.

Things get back on track with My Hot Dope, a piece of pure, aggressive House with vocals chopped and screwed beyond recognition and a bass line that hooks you like an incompetent angler.

What follows is a trio of tracks with the soulful Anthony Mills on vocals. The Game appropriately sounds like an amusement arcade shoved through a blender – in the best possible way. In Our Eyes recalls Daft Punk at their most playfully dancey while Bounce With Me brings heavily filtered kettle drum and angry bass to the party.

Ghost Machine takes the tempo down into a eighties-style slow jam with singer Ben Homme coming off like Wham-era George Michael behind a wall of swirling electronics. If a Drive sequel were possible, this track to slip nicely onto the soundtrack.

The Likes Of Me maintains the retro feel with twitchy guitar and a bass line that could easily have been dragged from a Rick James record.

I’m On Vacation, featuring a brilliant turn by Redman, couples delightfully silly raps with Godzilla-sized bass. If you listen to this song and don’t get to the end with a smile on your face, you may not be human.

Winter Blossom clashes with the previous song’s ebullience. With sparse drums and a sad but insistent bass line rubbing up against a distant and devastated female vocal, it’s a bit of a downer in the context.

25th Century Man ends things in a much more upbeat way sounding like a remix of the theme tune to a long-lost ’80s cartoon show. Nostalgia warning: anyone else remember Galaxy High School?

Our Disco Is Louder Than Your Disco is so stuffed with ideas and sounds that they burst out at the seams a little. Rather than a cohesive record, besides the trio of tracks with Mills and the distinct “’80s section”, this feels like a collection of tracks. That’s not necessarily a bad thing but it does make the listening to the record in one sitting a disjointed experience.

More on Moonbootica
Moonbootica – Our Disco Is Louder Than Yours