Moonface – Julia With Blue Jeans On 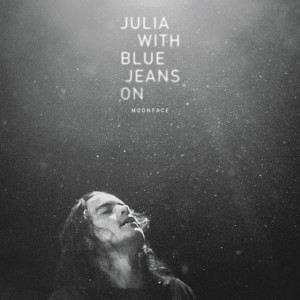 It’s a typical story. Boy meets girl, falls in love and it all goes wrong. His life and bands fall apart and eventually all that is left is a piano, regret, and reflection. In Finland.

With Wolf Parade on “indefinite hiatus” and Sunset Rubdown apparently on the officially pronounced dead list, Spencer Krug set off on a course of self discovery with Moonface as a solo project. The result so far has been a handful of albums focused around a single instrument and one nearly rock album, Heartbreaking Bravery, made with the band Siinai, that concentrated on dismantling the other half of a failed relationship.

If Heartbreaking Bravery was an outpouring of vitriol aimed at a target, then Julia With Blue Jeans On is the equivalent of a recoil. In the aftermath of a loss (and there seems to be quite a lot of that in Krug’s life one way or the other of late) one possible reaction is to lash out, retreat, re-evaluate and strip everything back to basics. That’s what Julia With Blue Jeans On is. Krug and a piano, and some serious introspection. Even the metaphors that tangled and obscured the meanings of his lyrics on his previous works are not utilised here. Instead he’s considerably more direct, presumably as a way to get to the heart of things, to keep the message pure, and to purge effectively.

This album is stark, beautiful, painful and to be perfectly honest, quite a struggle to listen to at times. There’s a line on second track Everyone Is Noah, Everyone Is The Ark where Krug sings “Everyone has to gather souls around them to feel useful, and loving, and loved” and it could be argued that this album is a way for him to reach out to people, to gather souls. After all, it’s just him and a piano. His band is gone, his love is gone, all that’s left is a connection to his audience. Similarly, those in his audience, perhaps in a similar situation, who will recognise the pain in these songs, and the album will resonate considerably as it offers something to cling to. Not of course that you need to be at a low ebb to understand these songs. Krug might well sing self-critically “and I’m really sorry for your loss, I can’t imagine how that feels” but loss is a part of life and most people are capable of empathy.

In fact Krug is self critical throughout the majority of the album as if flagellation will ease his mind. His opening gambit is “I’m a barbarian sometimes”, the title track states “I have a way of bleeding dry anything you’d call a rose” whilst on standout track (November 2011) he throws out “Set fire to my music, it wasn’t much good anyway” without much regard for the fact that it actually was pretty good. Eventually he’s on the beak and playing chess with himself whilst refusing to improve himself (Love The House You’re In). All of which would be regarded as self-defeating/destructive behaviour if it wasn’t all tied to such elegant and impassioned songs that are clearly a way to wipe the slate clean and move on (moving on and exploring new avenues is very much a constant of his career).

Krug’s piano is both terrifying and wonderful, often at the same time. Dainty classical inspired workouts (often appearing to represent Julia) are frequently torpedoed by crashing percussive rock tinted bass-hand interjections, seemingly setting genres against each other as Krug’s psychological battle rages in the lyrics. Complexities are cut short, shot down and bludgeoned, but not before they’ve had a chance to delight and flit across the pleasure centres.

At the end of this quite exhausting album, it is hard to ascertain whether anything has been resolved. However, if this is what Krug needs to move on, then Julia With Blue Jeans On is a testament to the healing power of creativity.