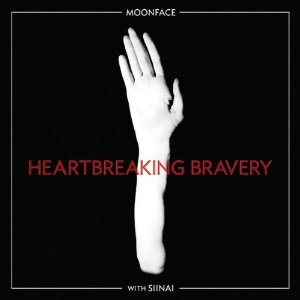 Canadian musician and Wolf Parade frontman Spencer Krug, playing under the moniker Moonface, has returned in collaboration with Finnish outfit Siinai with a new record, the befittingly epic-titled Heartbreaking Bravery. It’s a record which looks to the past and future in equal measure, and on occasion paints a particularly nightmarish picture of both.

Siinai’s backing provides a brooding and intense soundscape to Krug’s cold, Ian Curtis-esque vocal, reminiscent of both Curtis’ band’s prior and subsequent incarnations, that chills the listener to a great extent. It’s a restless and unnerving assault from start to finish. This backdrop provides the majority of the interest and atmosphere in the record, being evocative of pioneer innovators Brian Eno and David Bowie. The anthemic quality of some of the tracks, particularly the magnificent Yesterday’s Fire and single Teary Eyes And Bloody Lips, are also reminiscent of the E Street Band, but perhaps with a line-up that’s been stuck in the infinite wintriness of space for the last millennia. This mix of influence and originality is where the album soars.

It traces the different stages of heartache throughout with vast, uplifting optimism juxtaposing tense, brooding fear. I’m Not The Phoenix Yet is a particularly nervous tune, with throbbing bass drums and muted guitars, reminiscent of the unsettling intensity of the The Doors’ Not To Touch The Earth. The lyrics reflect themes of uncertainty and lack of self-esteem. In contrast, album closer Lay Your Cheek On Down is an epic, joyous anthem that finally resolves the record, but not before introducing a tense, chromatic riff to question this joyousness with an abject feeling of confinement and melancholy. The aforementioned Yesterday’s Fire and Teary Eyes And Bloody Lips are also particular highpoints; with the former recalling Bowie’s Heroes and the latter an Interpol-meets-M83 hybrid that borrows the finest aspects of both.

Krug’s lyrical subject matter, which, as the writing process evolved, became the idea of heartache, permeates the album to such an extent that it overrides the occasionally poor lyrics themselves (“There was blood and gore, so I headed for the door”); the lyrics remain similarly melodramatic throughout. Meanwhile the musicians have captured the feelings of loneliness and abandonment inherent to the subject with particular finesse.

There are occasional low points. Shitty City is a particularly overblown piece of neo-prog nonsense that wouldn’t be out of place at a solstice ‘gathering’, while the title track is rather directionless and self indulgent as openers go. The album in general treads a fine line between heartfelt and pretentious, and at times almost topples into the abyss. Yet the sheer scope and ingenuity of the record is what saves it.

Minor rants notwithstanding, Heartbreaking Bravery is a decent album. With so many bands that have attempted the doom and gloom direction the Moonface and Siinai took now residing in indie’s graveyard, it is also a particularly brave one.