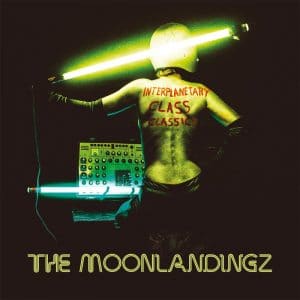 As the phrase goes, the truth is stranger than fiction. And they don’t come much stranger than The Moonlandingz. They originally began as a fictional band, the subject of the Eccentronic Research Council‘s 2015 album, Johnny Rocket, Narcissist and Music Machine…I’m Your Biggest Fan. The album told the tale of Johnny Rocket, lead singer of The Moonlandingz, and his obsessed stalker, played by Maxine Peake.

Then, in a very meta breaking of the fourth wall, The Moonlandingz became flesh, with Adrian Flanagan and Dean Honer of the ERC recruiting Lias Saoudi and Saul Adamczewski of scuzzy debauched punks Fat White Family, Slow Club‘s Rebecca Taylor, and Sean Lennon. A series of gigs followed, which seemed to redefine the word ‘chaotic’ with Saoudi taking on the role of Johnny Rocket and continuing his love of getting naked and crowd-surfing (often at the same time).

An actual album would have the potential of being absolutely awful – a real-life “cosmic kraut-abily group, wearing lederhoen and tin-foil socks” as Peake describes them on the ERC album. Yet Interplanetary Class Classics is very far from a joke: it’s brilliantly inventive, often thrillingly exhilarating and, given it origins, surprisingly accessible. It also has an impressively starry guest list – as well as Taylor and Lennon, there’s also cameos from Phil Oakey and Yoko Ono, while even Randy Jones, otherwise known as the cowboy from the Village People, makes an appearance.

Vessels is a storming opener, with two drummers bashing out a relentless glam-rock rhythm, and Lias Saoudi almost howling his lyrics by the song’s end – it’s quite the introduction, and is followed by the gloriously unsettling Sweet Saturn Mine, filled with eerie harpsichords and swirling synth chords. The chorus of “I don’t feel alright” and lyrics like “surrender now, the pain will never cease” only add to the slightly unnerving atmosphere. Later, the brief instrumental of Theme For Valhalla Dale crops up, which could be the new theme to Trumpton or Camberwick Green if the entire town was now addicted to heroin.

Quite what on earth The Moonlandingz are singing about is anyone’s guess – there’s a bleakly dystopian air to many of the tracks, but apart from the standout IDS (named after the particularly joyless Secretary of State for Work and Pensions and featuring a relentless chorus of “forty thousand years in the job club”), there’s not too many explicitly political statement to be found. Instead, there’s tales of lurid sexual discoveries in Glory Hole, the genuinely funny Black Hanz, with its namechecks of Tomorrow’s World and a ludicrous Vincent Price-style spoken word section, and the standout The Strangle Of Anna, where Saoudi and Taylor transform into a twisted Hazlewood and Sinatra for the 21st century.

It all culminates in the astonishing This Cities Undone, a six-minute psychedelic jam session with Saoudi, Taylor, Ono and Oakley forming an unholy sort of choir – like the rest of the album, it manages to sound both futuristic and oddly nostalgic. It’s the sort of album which could fall apart at any moment, but that only adds to the sense of exhilaration. In a world where Ed Sheeran and Drake are pretty much sharing the entire Top 20 singles chart, an album as wildly experimental and as much damn fun as this one is should be required listening.

The Moonlandingz MP3s or CDs

The Moonlandingz on Spotify