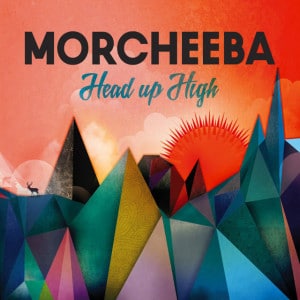 While certain acts (Mumford And Sons, James Blunt, Mika) attract blind hatred, Morcheeba have had to put up with something much worse: contempt. During their ’90s sort-of-heyday, Morcheeba were portrayed by their detractors as dead-eyed practitioners of ‘coffee table’ music, riding on the coattails of the then-nascent trip-hop scene.

Given that they’ve sold millions of records worldwide, it’s unlikely that the members of Morcheeba have lost much sleep over their lack of critical approval. Instead, they’ve moved into their 18th year with dogged determination.

The current incarnation of the band is the ‘classic’ line-up comprising founding brothers Paul and Ross Godfrey and singer Skye Edwards: this was the trio responsible for their first four, most commercially successful albums, from 1996’s Who Can You Trust? to 2002’s Charango. In the intervening period there’s been a fair amount of intra-band turmoil: Edwards was fired from the band in 2003; her replacement, Daisy Martey, went the same way two years later. Undeterred, the Godfrey brothers made 2008’s Dive Deep with a rotating cast of guest vocalists.

Those who instinctively support the underdog might, therefore, find themselves rooting for Head Up High, especially in light of its promising roster of guests (which includes Rizzle Kicks, Jurassic 5’s Chali 2na and White Denim’s James Petralli). Sadly, Head Up High doesn’t repay optimism. It’s neither a return to the form of the band’s (actually pretty good) early work, nor is it an embarrassing disaster. Instead, it’s merely mediocre.

Anyone who has fond memories of the 1990s and, more specifically, the original trip-hop movement may well find their pleasure buzzers being pushed by many of the sounds and textures on this album. There are fleeting samples, hip-hop-style scratching, grafted-on raps, and, of course, Edwards’ soothing voice. Moreover, there’s some sturdy tunesmithery along the way: Gimme Your Love, Release Me Now, Call It Love and Do You Good all boast decent melodies. And the arrangements’ tendency to retreat into the background is testament to their unfussiness: the Godfrey brothers’ production work serves the songs and tries its best not to get in the way of Edwards’ vocals.

Trouble is, the arrangements on Head Up High are low-key to the point of nothingness. Not once does a single instrument stick its head above the parapet, grab a song by the scruff of the neck and bring it to life. There’s a moment on Face Of Danger’s guest rap when some cowbells kick in and hopes are raised that the track is about to lift off, freak out or at least do something exciting or unexpected. But then the cowbells stop and the song ends with a whimper.

Matters are exacerbated by the lyrics, which are frequently anodyne (Release Me Now’s “Where there’s a will there’s a way you can get it / The old daily grind drags you down if you let it” being a prime example). Admittedly, no one comes to a Morcheeba record for poetry, but there’s no reason for the lyrics on Head Up High to be quite so lame. A couplet like “I wake up every day at dawn and life has come and gone / and there’s no other way home” is just about acceptable as a throwaway bit of verse filler, but it’s not something one builds an entire song around (To The Grave). Then again, To Be’s bizarre rap about spiking a rump steak with MDMA offers a stark warning against Morcheeba overstretching themselves lyrically.

Head Up High’s title is indicative of a band that doesn’t care what anyone else thinks as they head towards their third decade of existence. Fair enough: there are many, many worse bands than Morcheeba. There are, however, very few less essential albums than Head Up High.