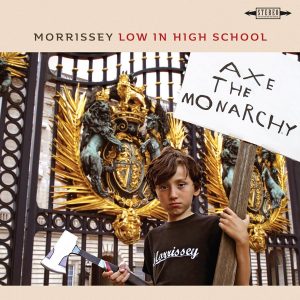 Though The Smiths inspire deep and widespread affection, Morrissey himself has always been a divisive character and is fast turning into a Marmite musician. Since his last, rather good album World Peace Is None Of Your Business in 2014, he has fallen out with his record label (yet again), published a universally slated debut novel and had a biopic of his formative years in Manchester released. He has also hit the headlines for various ill-judged remarks about the Manchester Arena terrorist bombing, immigration, UKIP and Hollywood sexual abuse. Bigmouth Strikes Again, you might say.

Now 58, Morrissey has been doing it his way for 30 years. Always an arch provocateur, his outspoken views have often been glossed over as those of a lovable English eccentric or as part of his maverick artistic genius. No question, he is one of our finest singer-songwriters, but he has become increasingly reactionary if not downright misanthropic. Sometimes he seems to be compulsively seeking attention, or just to have lost the plot – yet he still has something to offer.

His gift for melody remains strong, and his distinctive voice sounds as good as ever – even if what it is saying may at times rankle. His 11th solo studio album Low in High School is a mixed bag of brilliance and dross. There are some genuinely interesting new explorations while other tracks are deeply disappointing. Disconcertingly uneven, yes, but not safely predictable.

Produced by Joe Chiccarelli (who also helmed Morrissey’s previous album) the songs are co-written with different members of Morrissey’s backing band, most of whom are long-time collaborators. The controversial cover features a boy wearing a Morrissey T-shirt holding an axe in one hand and in the other a placard proclaiming ‘Axe the Monarchy’ while standing outside the gates of what looks like Buckingham Palace. Not surprisingly, politics are to the fore in the album’s lyrics.

My Love, I’d Do Anything For You – a powerful glam stomp, beginning and ending with wailing, and featuring raucous brass and shards of feedback – sets the album’s generally abrasive musical tone. It’s a strange mixture of harsh social commentary and typically self-pitying loneliness in which “society’s hell” and “The more I wish in my heart for someone the less likely they come”. The discordant sound continues in I Wish You Lonely, where loneliness rears its ugly head again, but this time Morrissey seems to be criticizing his own self-centredness – “Think of yourself only…And to hell with everybody else” – as well as condemning pointless deaths.

Jacky’s Only Happy When She’s Up On The Stage seems to be about the UK leaving the EU (Jacky as in Union Jack) where “Everybody’s heading for the exit”, though it’s not clear what point the pro-Brexiteer Morrissey is making here, especially as the rising sense of panic at the cacophonous end dissolves into children’s laughter. In Home Is A Question Mark the melodic sweetness of the vocal line is undercut by some off-kilter effects, as Moz’s restless insecurity comes through: “Home is some place I dunno.”

The poppy lead single Spent The Day In Bed has a catchy synth riff though the escapist message seems blinkered: “Stop watching the news / Because the news contrives to frighten you.” The longest track at over seven minutes, I Bury The Living effectively builds up a sense of brooding menace, but as not so much an anti-war as an anti-soldier song it is crudely patronising in mistakenly blaming army recruits rather than politicians for wars: “I’m just an innocent soldier / There would be no war / If not for me.”

The lyrics of the piano-led In Your Lap Crass are just as bad, counterpointing political revolution with oral sex: “The Arab Spring called us all / The people win when the dictators fall… I just want my face in your lap.” For some reason, Morrissey has used a tango rhythm in The Girl From Tel-Aviv Who Wouldn’t Kneel, a condemnation of American interventions in the Middle East: “What do you think all these conflicts are for? / It’s just because the land weeps oil.”

The oddly chirpy All The Young People Must Fall In Love unconvincingly contrasts everyday romantic relationships with power politics: “Presidents come, presidents go / And nobody remembers their name two weeks after they go.” When You Open Your Legs is embarrassing both musically and lyrically: Spanish-style trumpet and castanets, plus a sickly string arrangement, accompany Morrissey’s rhapsodising: “Everything I know deserts me now / When you open your legs.”

The electropop-ish Who Will Protect Us From The Police? begins with police sirens and a big brassy fanfare in its censure of police violence as a tool of repressive government in Venezuela: “There are flames high in the sky tonight / Tanks on the street / Attacking free speech.” Israel, a lushly melodramatic piano ballad, is an uncritical love letter to Israel – “In other climes, they bitch and whine / Just because you’re not like them” – that ends the album on a highly contentious note, the sort of thing that ensures that Morrissey will always provoke a strong reaction, and ensure the column inches keep referencing his every utterance.