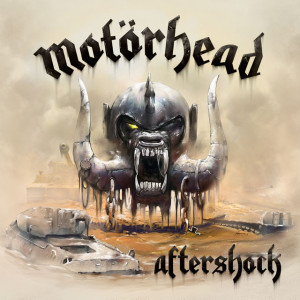 Something’s gone horribly right with the world. Back when Lemmy unleashed Motörhead on an unsuspecting world, no-one could possibly imagine that a 67-year-old would ever sing the same songs they sang as a young man. But 37 years, countless Jack’n’cokes, a mountain of speed, plus more recently type 2 diabetes, defibrillators, and a series of cancelled shows later, and here it is on record, as fast, gruff, heavy, hearty, and hale as the band has ever been.

That extraordinarily-faced international treasure Lemmy plugs on, refusing to keel over and die, but giving the fans exactly what they want, time after time. Which means that distinctive bass guitar growl, double-bass drums, four closely-typed pages of thanks and endorsements, and lyrics that could easily double up as slogans for an apocalyptic biker gang – “All we know is black despair”, “brothers of the snake”, “dead men at my side”, “silence ain’t an option”.

So far, so metal. Except that Motörhead are not, and never have been, metal – but rather a wilfully crude amalgam of rock’n’roll, blues, hard rock, and punk, untouched by the posturing technicality that typifies that other genre. The solos bend and wail where metal would widdle, and the playing throughout is filled with punkish abandon. Crying Shame could almost be a Quireboys number (apparently recorded in the Later… with Jools Holland studio if the somewhat unwelcome boogie-woogie piano part is any indication), Death Machine’s riff is almost jazzy, whilst Lost Woman Blues really requires no further description.

It would be unfair, too, to dismiss Lemmy’s lyrical contributions as mere cliche. Under the cartoon rocker exterior, he’s no-one’s fool, and there’s a refreshing wisdom within some of the best stanzas – “I believe in rock’n’roll, I believe in songs, put your faith behind it and you won’t go far wrong” from Do You Believe, or End Of Time’s “Standing by the ocean, wishing I could swim, wishing that the future didn’t look so grim”. And hanging over it all is the question of impending mortality – Dust And Glass sees him lament how “your life slides past”, and Heartbreaker is clearly dealing with matters cardiac rather than romantic.

If this all sounds depressing, fear not. This album is full of fun, and peppered with potential classics. Heartbreaker offers up a gruffly melodic chorus, while the drum fills that herald the brilliant Going To Mexico and Paralysed are like a shot of adrenaline through the sternum. But there nonetheless remains the sad irony that by taking inspiration from death, Motörhead have never sounded so alive. How long they can actually stay alive sadly remains to be seen, but if this were the last album they ever made, it would be a fitting and worthy conclusion to an extraordinary career.