Motörhead – BBC Live And In Session 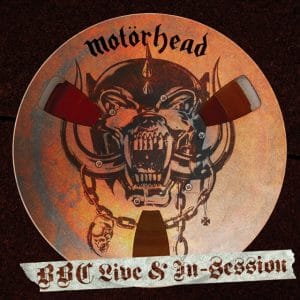 Motörhead playing live at the BBC? Bloody hell, that does sound like an unexpected, and more accurately, unlikely event. One of the world’s most ear-crushing bands, recorded live at a highly regarded and trumped-up broadcasting house? Never in a million years. Well, actually yes, it did happen and here it is.

Alongside the recent superlative Stage Fright DVD and this year’s reissue of 1979’s Bomber album, this collection of live recordings and session work is an obvious cash-in to celebrate the band’s 30th anniversary, especially as there are so many live versions of these songs already available, be it on the silly amount of Motörhead bootlegs to be found practically anywhere or the few band-endorsed live albums. So straight away, it is blatantly for zealous collectors only.

Both discs are laid out in chronological order and recorded from four specific sources over a period of eight years, beginning in 1978 at a John Peel recording session.

Disc one has some obscure goodies such as Keep Us On The Road and Tear Ya Down Sister (from a Peel session in 1978.) The vastly undervalued Too Late Too Late is an absolute gem and Limb From Limb is another unrecognisable song, filled with the typical Motörhead dirt and grim; both of which were recorded at The Paris Theatre, London in 1979.

Many of those early tracks on the first disc show the rough bluesy sound the band had started out with. Some of them still sound a little gritty but it shows the origins of this outstanding British rock institute – they have likable confidence and grit of their own. With the exception of the more famous tracks such as Stay Clean, No Class and Capricorn, the songs on disc one are sadly disregarded from any recent live set.

Disc two presents a stunning sounding Fast And Loose from the David ‘Kid’ Jensen five-track session back in October 1981. Again the heavy blues influence is noticeable, especially on the rare Like A Nightmare. The other half of disc two is from a session recorded for the Friday Rock Show in 1986, which was to plug the rock solid Orgasmatron album. A furious version of Dead Forever and the classic Killed By Death is particularly outstanding.

With barely any audience cheers on the live tracks and a minimal amount of Lemmy’s witty in-between song banter, many of the songs feel a tad mundane and lack the flavour of a truly exciting Motörhead live experience. There is also little need for two versions of both I’ll Be Your Sister and White Line Fever. Yet all that being said, it is still a strong collection that pays attention to the lesser-known songs in a vast cannon of ammunition.

It has taken Motörhead’s 30 years to perfect their distinctive sound so what this collection does show is that, like a good bottle of wine, they have gotten better with age.