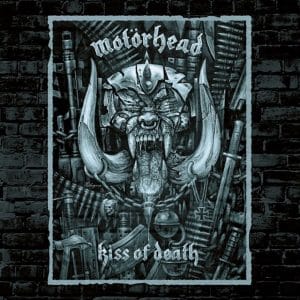 A bit of a shocker this, after 30 years of producing some of the heaviest white knuckled metal around; Motörhead have turned their hands to a concept album of ambient electronica. Apparently after hearing Matmos‘ The Rose Has A Teeth In The Mouth Of The Beast, the band decided to create a soundscape from the sampled sounds of Lemmy farting and Filthy Animal Taylor’s knee joints creaking.

Yes, this is of course complete and utter piffle. Kiss Of Death is, as you would expect, yet another slab of songs from a band that refuses to compromise. As always these tunes find Motörhead straddling punk, metal, and blues with a half empty bottle of Jack Daniels in their hands and a shit eating grin plastered across their faces.

From the opening blast of Sucker, you know that this is going to be business as usual. Essentially a blues work out, where a large double is ordered at each of the 12 bars, it’s frantic stuff. Lemmy commands the attention, with his familiar guttural belch high up in the mix. “Nobody cares if you’re in or out, we’re gonna give you a smack in the mouth,” he gurgles in that familiar drawl. It’s a sentiment that really sums up what Motörhead’s music is all about. If you’ve ever heard Ace of Spades and thought ‘hmm, that’s not for me’ then you might as well give up now, because the philosophy here is very much a case of “If it ain’t broke, don’t fix it”.

So for the duration of this album you get sweetly buzzing guitars ripping out amphetamine spiked riffs pushing Lemmy’s growl along at a rate of knots. Lyrically the themes are as you might expect, Lemmy as the sex-god (or slut as he calls himself during the almost disturbing imagery of One Night Stand), and of course the feel of violence bubbling under the surface. If there’s a gripe to be had, it that just occasionally, things seem a little too polished. When Lemmy’s voice is sounding as dirty and rough as this, it seems unusual that his familiar rumbling bass gets a little lost in the mix here and there; lending the album a slightly more polished treble sound. It’s a minor thing though because there are plenty of great moments on Kiss of Death.

God Was Never on Your Side sees Lemmy almost in a contemplative state of mind. Starting with a gently strummed guitar, his voice seems to take on a gentle resonance. Grizzled and whiskey soaked, his musing on the existence of God and the nature of religion almost brings a lump to the throat. Just as you start to ponder Lemmy’s godlike status within metal, his bass makes itself known; the song rumbles into life and takes you off to rock and roll heaven.

The speed metal of Kingdom Of The Worm sticks out like a sore thumb on Kiss Of Death. Against a back drop of the speed fuelled blues to be found all over this record, the double bass drums, and relentless riffs call to mind the likes of Slayer as it grinds away stating it’s claim as the most threatening moment on the album.

So it’s business as usual then, a cracking album, from a band that rightly deserves the description of legendary. After 30 years they still sound vital, vibrant and ridiculously exciting. When you contrast Lemmy and Motörhead’s output to that of someone like Ozzy, whose most recent effort was that execrable covers album, it really puts things into perspective. Motörhead may not achieve the level of fame and adulation accorded to Oz, but at least they can hold their heads up high, and know that they still produce music that has real heart.