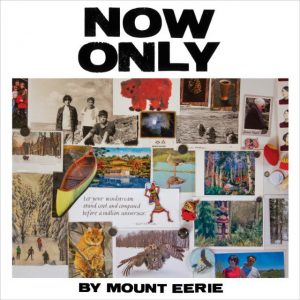 Although he has had a prolific output since the late 1990s under the band names of The Microphones and latterly Mount Eerie, Washington State-based singer-songwriter Phil Elverum largely went unnoticed by all but a hardcore fan base until last year’s A Crow Looked At Me received widespread critical acclaim as one of 2017’s most distinctive, memorable records.

A devastatingly raw expression of personal grief recorded in response to the death of Elverum’s wife Geneviève Castrée in 2016 at the tragically young age of 35, A Crow Looked At Me saw the bereaved musician eschew much of his previous work’s experimentation to produce a suite of sparse, shatteringly direct songs that were so honest in their pain they were sometimes uncomfortable to listen to. What made the record particularly impactful was its focus on the forensic details of a life blown apart in every way; by recalling small incidents like discovering a discarded old toothbrush, or shuttering the windows, and how these can often evoke memories that are profoundly powerful.

A Crow Looked At Me sequentially chronicled the passage of time, from the raw immediacy of Castrée’s death happening to the record’s conclusion months later. But Elverum clearly still has more he wants to say and on Now Only, he’s created another outstanding, although sometimes almost unbearably bleak, album covering very similar territory.

It’s clear from the first lines of opening track Tin Tin In Tibet – “I sing to you/you don’t exist” – that Elverum is still struggling to come to terms with the magnitude of his loss. He also references the way he is using his music to try and process his pain – “I recorded all these songs about the echoes in our house now” – before going on to recount in exquisitely sad detail he and Castrée first days together: “I read the one book we had with us aloud with my head on your lap/sinking into you/Tin Tin in Tibet in French.” As a snapshot of the intimacy between two people that’s been cruelly wrenched away it’s quietly stunning: at moments like this, Elverum touches his listeners in a way few artists can match. Perhaps the closest comparison is to Peter Silberman of The Antlers, who mined a similar emotional seam on the exceptional Hospice.

Now Only occasionally treads a fine line between soul bearing catharsis and a vividness so acute it feels disconcertingly intrusive. Earth, in which Elverum discovers parts of his wife’s bones among her scattered ashes while playing in the garden with their child, is an example of imagery so upsetting one wonders if it would have been better kept private.  Similarly, the musical textures employed can feel slightly incongruous at times – notably on the title track, where Elverum sings “people get cancer and die/people get hit by trucks and die” accompanied by a jaunty, rolling piano.

Yet on an album as brave and truthful as this, it’s inevitable there will be a few missteps; instances where each individual listener will experience a challenging emotional reaction. What we also see are glimmers of hope emerging for Elverum through the fog of brutal introspection – “these waves hit less frequently/they thin and then they are gone” – together with odd flashes of ironic, dark humour, not least when he finds himself “at a music festival that had paid to fly me in to play death songs to a bunch of young people on drugs” where he later sits up into the night chatting about songwriting with Father John Misty.  This offers some welcome encouragement that Elverum is going to make it through to the other side, which – for all the significant artistic achievements of his last two records – we are all surely rooting for him to do.