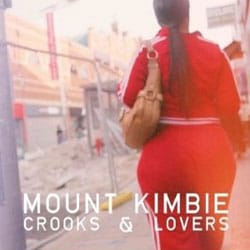 British duo Mount Kimbie, veterans of a couple of EPs and some remixing work, now present their debut album Crooks And Lovers. It’s billed as a greatly anticipated statement of purpose and a defining moment for “post-dubstep”.

Without becoming too mired in the intricacies and subtleties of genre, it would appear that what Mount Kimbie do is to take what Wikipedia describes as “reverberant drum patterns, clipped samples and occasional vocals” while downplaying the “overwhelming bass lines” of dubstep, and adding their own next-level spin on what has so far been the significant electronic/dance movement of the new century.

So, the fractured vocals of dubstep are much in evidence.� The album starts with children’s voices in Tunnel Vision, while Would Know features crowd chatter, and Between Time has a kind of muttered semi-inaudible vocal.� Sung samples are often electronically manipulated: played backwards and in small snippets on Before I Move Off and Mayor, for example.� The singing is closest to a conventional vocal on Carbonated, where longer excerpts of the appealing female voice are used.

The reverberant, recurrent patterns that characterise the genre also feature.� Would Know (one of the dubbier, bassier tracks) repeats its gentle rhythms and tones, constructing patterns that vary slightly and build over the course of the track. The trick is repeated on Before I Move Off – soothingly, soporifically hypnotic; and Mayor, with its scattergun tune and stop-start beat.� The occasional use of arcade game bleeps and glitches, on Would Know and Before I Move Off in particular, again remind us that we are firmly in the realms of electronic dance music.

But where this music departs from the dubstep template is immediately apparent from the most cursory of listens.� This is an album with a markedly gentle, slow and mellow pace, often situating itself much closer to chill-out or ambient than to the more animated dance-music-to-dance-to styles.� Tunnel Vision’s ambulatory, shuffling beat, in-and-out fades and atmospheric, ephemeral mood sets the tone for most of what follows.� Carbonated is all unworldly echoes and light melody – and is one of the album’s undemonstrative highlights.

Ode To Bear, too, starts out downbeat, rather melancholy in its liquid, repeated glitches but still warm and somehow human, while Ruby is desultory and a little desolate, with a simulation of the whistling wind or stormy sea as backing, but again full of a windswept and characterful atmosphere.� Between Time too is sparse and downplayed, and – wonderfully – recalls the end of the night at a smoky, slightly seedy jazz club.

What is constant throughout is the unshowiness.� These are musicians well able to create compelling music without recourse to bells and whistles, layers of sounds, effects or gimmicky tricks. Instead they make a virtue of a sparse, spare minimalism, a subtle restraint that is as surprising as it is effective.

Like the pioneers of post-rock, who took the rock template and created something cinematic, imaginative and descriptive in the abstract, Mount Kimbie appear to have succeeded in moving dubstep toward one of its many possible future directions, mutations or splinters.� While it is not a direction that will suit dancefloor enthusiasts, those seeking a post-rave comedown, a period of rewarding contemplation or a simple chill-out will find much here to appreciate.