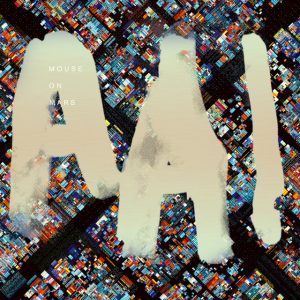 The titular acronym of Mouse On Mars’ 12th record stands for Anarchic Artificial Intelligence, and once again the Berlin based electronic pair have applied their trademark chimeric vibrancy to the concept of machine learning in the age of the Anthropocene.

Collaborating with an army of likeminded souls, including Boston University’s Professor of English Louis Chude-Sokei, data experts Birds On Mars (no relation), programmers Ranny Keddo and Derrek Kindle and Dodo NKishi, the percussionist extraordinaire who has been working with MoM since their second album Iaora Tahiti way back in 1995, the duo of Andi Toma & Jan St Werner have drawn on that collective talent to generate a tenacious dialogic led surrealist collage.

The empathetic nature of their rhythmically complex routine gives the work a perceptible humanist quality despite its reliance on digital means. They slip and change through methodical processes as Chude-Sokei’s omnipresent voice, a warm pedagogic timbre, worlds away from previous participants Laetitia Sadier of Stereolab’s situationist chanson or the late Mark E Smith’s sarcastic drawl prevents these improvisational anthropologies from accumulating inertia. His vocals are willingly processed, played backward and forward, chopped and distorted beyond comprehension to form animated overlapping narratives. On the track Speech And Ambulation he sums up the records ethos mentioning Consciousness is optimisation’ and the sophisticated manipulations indeed indicate the emergence of a hyper real technological evolution.

Making use of sequential data software to trigger non binary electronic abstractions that are absent of any exigencies that might normalise their structure, these 20 somatic movements track fluidly across the cartographic horizons of cyberspace. Clustered speech fills every void, the only absence on the record being the ensemble’s occasional foray into vernacular musical aesthetics, although on the bleary eyed Walking & Talking, there are brief processed allusions to Lou Reed’s Walk On The Wild Side at its crescendo.

MoM’s engaging sound design has repeatedly bordered on the anarchic as they continue to warp meaning and function, prompting those who find themselves eavesdropping on this particular bio-mechanical creation story to apply their own similarly rigorous levels of concentration in order to comprehend its freeform implications.