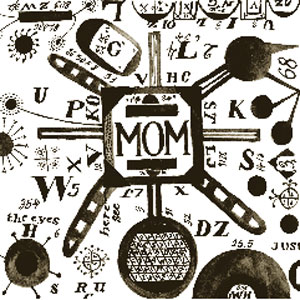 Making electronic music sound organic is not an easy thing to do. Sure, any old fool with a 303 and a spare hour can make a beat sound icy and elegant or distant and stark, but to make something which radiates warmth, which throbs with anima and displays all those other, softer emotions – that’s hard.

So one of the best things about Parastrophics is that it truly is warm and fuzzy and playful. Really playful. As playful as a puppy, romping and galavanting and shoving its nose in your crotch.

The sheer wide-eyed exuberance of the album is made all the more impressive by the knowledge that Mouse On Mars have been at this for two decades now. Throughout their career, they’ve displayed a tendency to never stand still, racing through all manner of genres and sub-genres (and even Mark E Smith) in an 11-album sprint.

Appropriately enough, Parastrophics continues the trend of constant motion. It doesn’t stop for a second. The whole album is a barrage of elements, welded together with a gleeful confidence and a restless desire for experimentation. Bits rise and fall from the swamp underneath, disembodied voices cut in and patterns are discovered, played with and then summarily dismissed back into the mire from which they came.

Madness, but somehow tied together. Sometimes it’s hard to tell one bleep from the next, but repeatedly across Parastrophics’ duration you’ll spot something, and it’ll tweak on your memory as previously heard. Be it the bouncing ping-pong ball (first appearing on Chordblocker, Cinnamon Toasted). Or that please-leave-a-message-after-the-tone beeeep which seems to work as some kind of sonic marker on several of the other tracks, there are common chords tying the disparateness together.

It’s those recurring motifs that makes it sound like Mouse On Mars have a plan. It isn’t just random ideas (although there are lots of those); there is a commonality here. Just not an obvious one. More of a Jackson Pollock sort of one. Back away, stare long enough and maybe you’ll spot it in amongst the drips and the splatters. But maybe not.

Parastrophics is never dull, and there are some great moments on here. But occasionally it is a little too restless for its own good. Some of the experiments fizzle out really quickly. Which is fine, because you know the next one will be along in short order, but the damp squibs do just slightly detract from what is, ultimately, a hugely fun and strangely amusing record.