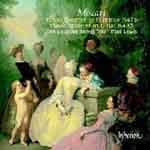 Mozart is well known for his exploits in the fields of opera, symphony, concerto, mass, chamber and solo music – in fact, just about any classical discipline available at the time was mastered by him, an astonishing achievement in his mere 35 years.

His two piano quartets tell a different story however, for they are virtually the first works in the new medium of piano, violin, viola and cello. Although Beethoven composed three piano quartets at the age of 14, it’s the mature Mozart examples, beginning in the same year of 1785 that have endured.

It seems odd that in that year the public found these works too difficult to play and listen to, and as a result Mozart failed to honour the contract made out by his publisher Hoffmeister, asking for three quartets.

We shouldn’t be too harsh on those audiences though, for Mozart was in the process of creating the piano quartet in the form of a scaled down concerto. Certainly the piano part is difficult, although you wouldn’t think so given the ease with which the promising Paul Lewis negotiates the tricky passagework in the first quartet.

This first quartet is in Mozart’s ‘serious’ key of G minor, shared with the more famous 40th Symphony, and the four players give it due care and attention, from the call to arms of the opening to the relative brightness of the finale. The second quartet shares an affinity (and a key) with the Piano Concerto no 22, and it’s a challenge for Lewis and the Leopold Trio in their presentation of the main motif in the first movement, which appears in various guises no less than 37 times.

They are helped to achieve this through sensitive playing and above all Mozart’s invention, as the harmony moves at speed to keep up. The slow ‘Larghetto’ movement is affectionately played, leading to the exuberance of the finale, sunnier in outlook than the first quartet.

The four players here are up against stiff competition in the recording stakes, with some fine mid-price offerings around. Lewis and the Leopold offer a highly competitive version though, with Hyperion presenting a clear digital picture that gives the music enough room to breathe.

It’s a fascinating insight into two of Mozart’s lesser works, and also interesting to note that The Marriage of Figaro immediately follows the second quartet in the Kochel catalogue of Mozart compositions. As much as anything this is a great disc to relax to, and a chance to marvel at the advances of string and piano playing in the last 200 years.