by Laurence Green
published: 13 May 2013 in Album Reviews
Tweet 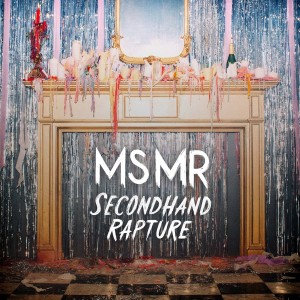 Every year, an act will come along that feels like they were exercising the fine art of balance between a precise sense of cool and inherent pop charm since before they could even walk. Increasingly over the past year, MS MR have emerged as one of the prime candidates to lay claim to that crown in 2013.

For the New York duo – comprised of vocalist Lizzy Plapinger and production whiz Max Hershenow – it’s as if the very essence of artfully realised, enchanting melodies is second nature. Where other acts might strive and yearn for that one, luck-blessed song where everything properly comes together, on MS MR’s debut album Secondhand Rapture it’s like a stumbling-upon of all that fully formed and ready to go. Previous singles Fantasy and Hurricane stand as case in point, opposite sides of the same coin – the former sprightly and upbeat, the latter pensive, stately. In both instances though, melody remains king – that kind of wistful, beautiful aching tenderness of something half-remembered.

Musically, their tapestry is an often simple one – like Florence And The Machine stripped down to the bones; vocal excess and blustering grandiosity replaced with a candied softness and velvety warmth to the production. Songs like Bones and the so-good-it-has-to-be-a-single Think Of You are joyous in their own right; but place them in the context of the entire album and each one comes like the ebb and flow of the sea – the string-soaked productions supplementing and building-upon their predecessors until all that remains is one singular, almost frighteningly robust body of work.

And it’s that more than anything that perhaps sticks in the mind when it comes to MS MR – the sheer consistency of it all. One song of the calibre of Bones might have been a bit of quaint luck, but here, that quality comes again and again – springing effervescent from the floaty, ethereal beauty of Ash Tree Lane or the rhythmic pulse of Salty Sweet. We’ve already mentioned MS MR’s command of great melodies, but it bears repeating; for all its rich fashionable stylings, Second Rapture is a pop album to its very core and wears the tag with pride.

In a year where the likes of Tegan & Sara, Haim and AlunaGeorge have already helped shore up pop’s defences, MS MR settle with ease into the wider landscape. For them, you feel, everything else is incidental – by-products of an already winning formula. For at the heart of each of the songs here is a touch of resonance – the kind that all the best pop records have. Whether each track in question happens to be weaker of stronger, a richness that speaks out with a singular voice remains throughout; gently, measured in its tones. It feels like a voice you can trust.