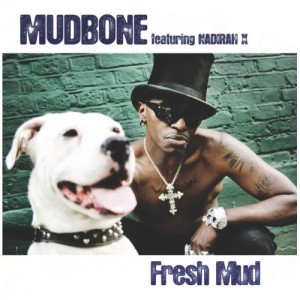 Just where in the funk did this come from? There’s a long line of distinguished P-Funkers still strutting their stuff – touring the world to devoted audiences as they Maggot Brain once more, follow with their asses where their minds once went, bringing nations together under the groovelight of the good (mother)ship connection.

They’re still there, and like most ’70s heroes they’re still playing the old stuff both because the punters want it and because it’s infinitely better than anything original they’ve released since. Now here comes Gary ‘Mudbone’ Cooper, veteran P-Funk and Rubber Band vocalist, teaming up with Dave Stewart and a whole host of luminaries including Bob Dylan, with an album of blues-influenced funky eclectica. It’s good – no, scratch that, you’ve already seen the score anyway. Fresh Mud is way beyond good, often driving past the window of very good into the exclusive land of genius.

Opening track Make The Devil Mad sets the eclectic agenda from the off, with a rolling pop-funk rhythm cascading into huge distorted synth blasts and into bits and bobs of just about everything, turning a straightforward blues number into a groovy genre melting-pot. Karma is even better, countering a delicate, almost country intro with a powerhouse of a guitar riff worthy of King’s X. Both songs could have been messy and over-indulgent, what with all the different ideas floating around all over the place, but they come out as great, simple pop songs. It’s almost as if Cooper and Stewart have gone back to the blues roots of pop music and started again, going back to basics with a much bigger toybox of musical ideas than the original rock n’ rollers had in the ’50s.

That might upset some long-time P-Funk aficionados, as Fresh Mud isn’t an album that requires prior experience of P-Funk in order to get into it – these really are pop songs, not prog-funk epics, and hugely accessible, radio friendly ones at that. Stewart’s ’80s sensibilities are also an obvious prescence, and could understandably scare off a few listeners, but even with a cynical ear it’s hard to get over both how accomplished and how damn catchy everything is here.

All three opening tracks have more than a hint of a voodoo in the blues, culminating in the deep south synth-funk of Evil – from then on the spiritual side of the album starts to take hold. He Didn’t Make Heaven to be Alone moves through R n’ B, country and (most effectively) gospel territory. It’s the album’s only mixed bag, perhaps a little too preachy – while the album is lyrically conventional and unpretentious there’s only so many times we can hear “I was blind now I can see” without thinking ‘OK, whatever’.

However while the downtempo quota goes up as the album proceeds, this only goes to show that Mudbone is a top quality proponent of the ultra-cheesy 80s pop-soul ballad. It’s impossible to ignore Stewart’s instrumental influence on the likes of Boy From Baltimore, Life Don’t Mean Anything or Pray – again this could be enough to have a few of you reaching for the sick-bag, but it’s difficult to argue that these aren’t cheesy ’80s pop-soul ballads of the utmost quality – real feelgood music.

I could go on – from the Doors-funk of Freedom’s Coming to the absurdly cheerful Walking on Air, this is a pop-rock-soul-funk-gospel-blues album utterly devoid of cynicism or irony, a genuine labour of love. As the album draws to a close with Bob Dylan tinkling away on a piano over a happy pop beat, you know you’ve just heard something really special, and it seems to get even better with every listen too.

It may not be for everyone – the more insecure hip-hop heads or blues fiends may no be able to recover from the radio-friendly nature of it all. For anyone else, though, this is a classic in the making.