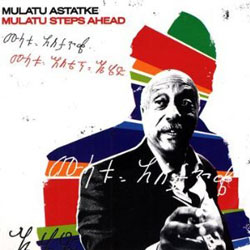 Mulatu Astatke is the father of Ethio-jazz. Born in 1943, he has had a varied career as a musician and arranger, working with Duke Ellington in the 1970s and, more recently, collaborating with such groups as the Massachusetts-based Either/Orchestra . In 2008 he released Inspiration Information Vol 3 with The Heliocentrics, and last year a collection of retrospective works arrived in the form of New York-Addis-London: The Story Of Ethio Jazz 1965-1975.

Mulatu Steps Ahead, however, constitutes Astatke’s first solo album in 20 years. He has long combined Western jazz with traditional Ethiopian music, and this album features nine tracks that blend entirely original compositions with some new renditions of his classic numbers.

Old songs such as Boogaloo and I Faram Gami I Faram are welcome inclusions to the mix. Those who are not acquainted with Astatke’s work will almost certainly warm to them on first listen, whilst anyone who already knows the pieces will probably find themselves understanding them afresh as they listen to the new, fuller scores employed here.

But it is inevitably the new compositions that feel the freshest and, if anything, they reveal a greater awareness of Astatke’s Ethiopian origins than some of his earlier pieces. It seems that in developing his methods for fusing jazz, Latin and Ethiopian music, he has found new ways of enabling each of the separate influences to find their own voice within the works.

In the album’s opener Radcliffe we can practically taste and smell Africa, with the wind (instruments) blowing through the trees, and percussion shimmering and sparkling in the sunlight. As time progresses, more instruments associated with Western jazz are introduced, but overall the piece penetrates right to the heart of Ethiopia with the sound remaining tranquil and reflective throughout.

Green Africa then starts in a folksy, ‘gypsy fiddle’ style, which is then added to so that a thicker, more highly charged piece soon emerges. But in this pulsating work the essential rhythm that it began with remains intact throughout, suggesting that, even when the improvisation is at its richest, the piece has not forgotten its true African origins.

Unsurprisingly, each track also tells its own story; The Way To Nice was composed on a tour bus in France, whilst Assosa adapts traditional music from the Assosa tribes in North-Western Ethiopia.

Mulatu Steps Ahead may not be the perfect choice for someone wishing to get into jazz for the very first time, but it is very accessible music. For this reason, you probably don’t need to know much about Western (let alone Ethiopian) jazz in order to recognise and enjoy Astatke’s genius, which is so proudly on display here.