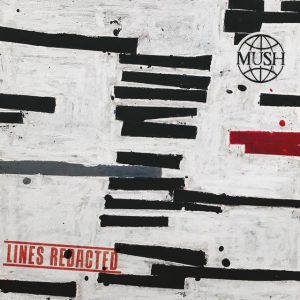 Probably the worst part of any form of recovery is the moment when you have to rip that plaster off. Worried you might rip flesh away and cause new wounds; you wince in anticipation of the inevitable waves of pain. Well brace yourselves, because here comes the agonising part. Dan Hyndman’s uniquely personal vocals on the second full-length Mush record have adopted a new gimmick, possibly developed as homage to the louche ramblings of Elvis Costello and Stephen Malkmus. They now bear a strong resemblance to Springfield resident Eleanor Abernathy, AKA The Simpsons‘ Crazy Cat Lady.

Her disheveled unconformity and trademark inebriated dramatics (initially played for laughs in a pre enlightened era) were eventually revealed, via backstory, to be a result of her highly educated and over achieving soul’s decline following exposure to the hapless follies of the world around her. Hopefully Hyndman will understand that the clumsy analogy comes purely from a place of love. That animated antihero’s feline predilections showcased a desire to protect and hoard the unusual and unloved from the weirdness that was surrounding them, which is essentially what the group have done here.

Each of these perceptive brain fried post punk scribbles feature accelerated warnings about cultural toxicity, be it Drink The Bleach, a prescient and humorous critique of a former US president’s dangerously berserk medical recommendations, or on Positivity, whose manic spasms lampoon the relentless machinations of the vapid Live Laugh Love mentality. Dusting For Prints has Hyndman adopting the blocked sinus drawl of Television‘s Tom Verlaine as they investigate a crime scene and ask ‘what the fuck happened’.

Comparisons with Pavement are unavoidable on songs like the titular Lines Redacted, Hazmat Suits, Bots! and Seven Trumpets. They all have the band relying on unschooled choppy time signatures and disingenuously mordant storytelling, and could easily have found a home on the Californian slackers magnificently loose Crooked Rain, Crooked Rain LP. But whereas that band often got called out for their sense of too cool for school detachment, Mush are very much about getting involved hands on.

Subjectively, it’s been a heavy year for the Leeds trio following the passing of their beloved band mate Steven Tyson and the pandemic’s crippling impact on the welfare of touring musicians, but in the face of personal and public devastations, the friends have avoided inertia and constructed a garish and cathartically atonal album that unbelievably manages to avoid catastrophe.