My Brightest Diamond – All Things Will Unwind 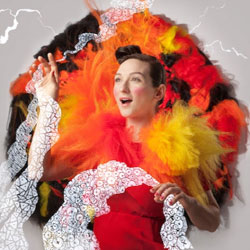 Shara Worden, the original and prepossessing talent behind My Brightest Diamond, has been writing and recording under that moniker since 2006’s Bring Me The Workhorse, a debut that was alternately mannered and melodramatic, flamboyant and raw. Now up to album number three, on which Worden has worked in collaboration with chamber ensemble yMusic, it feels like she has at last settled on arrangements, themes and setting that can best accompany her remarkable voice.

So, the album sees Worden encompass a range of moods, and songs varying quite significantly in style one from another, yet always exhibiting a humanity and lightness of touch that has previously been lacking in her art. The album starts with We Added It Up, jaunty and airy, the vocal alternately of a rich jazziness and an impossibly high soprano. There’s A Rat and High Low Middle both have a similar perkiness and lilt to them, each track enhanced by the quirky flourishes of the accompaniment – a trill of the flute here, a parp of the bassoon there – punctuating Worden’s voice and words.

Elsewhere there are tracks of sombreness and gravity. Reaching Through To The Other Side conveys an sense of personal history that is impressive and moving; She Does Not Brave The War is a slow, yearning ballad to an unsung heroine who “does not brave the war / but (…) saves the day”. Both convey the intended meaning without overegging their case, although Worden’s appetite for drama and theatre still gets an airing, on In The Beginning, Be Brave and the theatrical Ding Dong (perhaps the least successful track on the album: flamboyant, tremulous and a little incoherent).

Throughout, Worden’s lyrics – either obliquely or directly – proclaim a kind of emotional maturity that sounds hard-won. When she sings that “It takes a lifetime to learn how to love” on the wise Escape Routes, describes facing up to, and working through a range of terrors on Be Brave (“This is going to hurt / Be brave, dear one / Be changed, be undone”) or proclaims that “beauty grows with age” on She Does Not Brave The War, you get a sense that these are real life lessons learned. Her recent new motherhood also informs and permeates her songs. Reaching Through To The Other Side sounds like it could be describing a child in the womb (“through a veil, I feel a heart near me”), and the “hallelujah”s that celebrate In The Beginning’s “oldest story (…) finest tale” could be referencing childbirth. Most arrestingly, though, is the album’s closing track – and finest moment. I Have Never Loved Someone references the Mockingbird lullaby (“And if the breeze won’t blow your way / I will be the sun / And if the sun won’t shine your way” etc), but is actually more like a hymn of parental love to a newborn. To a counterpoint of squeaking that sounds like a cradle being gently rocked, and a church-like organ backing, Worden sings directly, beautifully, and in a voice infused with love and emotion, of her feelings towards her new child.

It is, quite simply, a show stopper. And as such, what a fitting note to end this glorious album, that is full of both gravity and levity, wisdom and beauty, and that is, most of all, infused with the honesty and humanity that make of it such a triumph.

My Brightest Diamond MP3s or CDs

My Brightest Diamond on Spotify