My Chemical Romance – Danger Days: The True Lives Of The Fabulous Killjoys 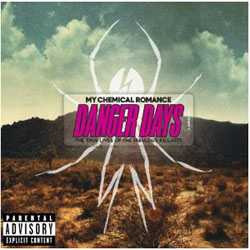 In a period of the year where nothing of great note is released, and amid depressing weather, we need something to keep the spirits up. Enter, with a timely flourish, My Chemical Romance.

The New Jersey collective – now a quartet – unleash Danger Days: The True Lives Of The Fabulous Killjoys, an album whose title alone raises questions. Is it clever? Certainly not. Is it as pomp as their 2006 rock opera The Black Parade? Thankfully not. Is it back to the days of traditional ’emo’ pop punk? Not really. So what is it? Arguably the most straightforward sounding record that they’ve ever made. Pop hooks are much more prominent, it’s lyrically less angst-ridden and, in consequence, is more universally accessible. It’s also the result of a comic book being brought to life as a musical. It even comes complete with a cringeworthy DJ voiceover/narrator. Queens Of The Stone Age‘s Songs For The Deaf did this sort of thing much better.

But the sheer strength of the high points save Danger Days from being a wreck. These are songs that have been blatantly written with the intention of getting tens upon thousands of people singing along. Bulletproof Heart is bold and vibrant with a gloriously euphoric chorus, Party Poison is brilliantly loud and brash and D/E/S/T/R/O/Y/A is noisy and disgruntled but deliciously menacing (and probably the closest to My Chemical Romance of old). The rockier songs certainly outweigh the ballads but The Kids From Yesterday is quite fun – in an ’80s arena rock lighters-in-the-air kind of way.

In contrast to their previous record, on which they felt the need to dress up as some sort of ‘shadow band’ straight out of Disneyland for the sake of getting a message that got lost amongst the bombast and OTT nature of their sound, this is a refreshing change. Unlike, say, 30 Seconds To Mars, for the most part they have the tunes to match their ambition. It might take a while to grow, and it might not be clever, but when they’re making music that’s this fun, who cares?

My Chemical Romance MP3s or CDs

My Chemical Romance on Spotify