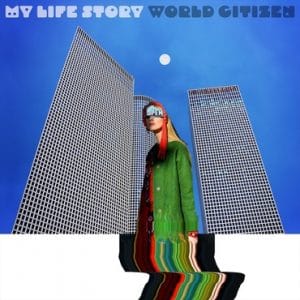 When you consider the last time My Life Story released an album Tony Blair was only three years into his term as UK prime minister, you get an idea of how much things have changed in the intervening period. And yet, as their home country flounders from one political omnishambles to the next, there is something strangely reassuring about the return of Jake Shillingford and his collective to the long playing format.

The reassurance comes from the immediate realisation that the band have moved with the times, while retaining the style that won them a loyal following in the mid-1990s. World Citizen is not an attempt to recapture past, string-laden glories, though. Rather it draws on those as part of a document of how Shillingford sees the world today, and how he can respond to that with music.

His stance is immediately confident and full of positivity. #NoFilter, the first of World Citizen’s ten tracks, acknowledges in its very title how media has moved on. And yet there is genuine elegance here as he sings of the Instagram generation. “Outside it’s fake, every image opaque, but in this room I can see your truth, there’s no filter”, he sings over a stately piano, the backing gathering power as the song progresses.

It is an effective calling card for the album. Broken sports a confident swagger, while Taking On The World is a call to arms that could have come from a reformed and revitalised boy band. With #NoFilter they make a strong, windswept opening trio.

Later, though, Shillingford lays open the cracks in his own feelings. A Country With No Coastline examines closely our feelings of national association and the referendum, “lost in cartography, then the epiphany, and my world came tumbling down. A country with no coastline…I’m fading, come rescue me”. It is initially reserved and vulnerable, but bolstered by a solemn brass intonation it comes through fighting. So too does Overwinter, a widescreen orchestral number that digs deep to overcome its anxieties.

Despite these heady heights the album’s central track The Rose The Sun is its deepest emotional statement, with vulnerable string tremolos and a poised vocal that hangs over the worrisome harmonies of the chorus. “My love is like the rose”, sings Shillingford, “the more you cut it the more it grows”.

These are the moments of vulnerability he embraces in the context of a ballsy showing – for there is fun to be had in some unlikely stylistic shifts. Sent From Heaven starts with a swing in its step not a million miles from Mr Bublé, glorying in love, while the swagger of Broken reveals a long-lost cousin of Aztec Camera’s Good Morning Britain. Each sits just the right side of derivative.

The strings, always My Life Story’s calling card, make themselves known in beautifully written orchestration, asserting themselves in arrangements that are ideally weighted, complementing the album’s statements rather than smothering them.

It is a warm welcome back, then, to these prodigal guests from the era when Britannia was cool rather than cruel. The world may have changed almost beyond recognition since Joined Up Talking was released in 2000, but World Citizen shows resolve, determination and strength in depth from a band still very worthy of their place in today’s pop canon. Here’s hoping for an album between now and 2038, at the very least!

My Life Story MP3s or CDs

My Life Story on Spotify

More on My Life Story
My Life Story – World Citizen
My Life Story’s Jake Shillingford: “We had Oasis supporting us. That was quite a mad time” – Interview