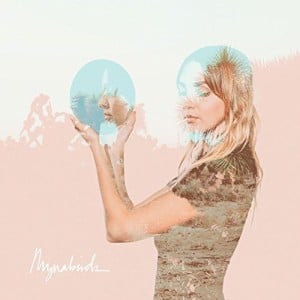 For some there is always one quality within music that they look for, one that instantly embeds the music into conscience and heart. It can be the lyrics, the melody, the meaning or even something more fundamental like the sound of the drums or the rhythm track. For many though, the one thing that truly cuts through to make a piece of music special is the voice. Laura Burhenn, who records as The Mynabirds, is someone who is certainly blessed with one of those voices.

Lovers Know is the third album from The Mynabirds released on esteemed US indie label Saddle Creek and it sees Burhenn aligning her wonderful voice to some of the softest, refined and frequently beautiful music of their career. The music featured here features a notable shift towards a more prominent electronic pop sound, though it is predominately soft focused and understated. Nothing is bright and gaudy. It’s a sound that serves her well.

Opening track All My Heart is a slow burning, emotive introduction to the album’s charms. Burnhenn sounds assured and strident as she confidently exclaims ‘When I love I love with all my heart.” A statement of intent and confidence is at the heart of the record. Semantics acts as the record’s key track; here you have a bona fide hit. A glorious concoction of witty lyrics, swooshing pop melodies and Burhenn’s lilting soft croon, it’s a life-affirming slice of pop wonder. The record fails to quite hit those exalted heights again as it progresses, but there is still much to savour.

At times, the music is just a little bit too understated and sparse; however, this is offset by Burhenn’s vocal dexterity, which always captivates. Particularly on the Stevie Nicks like croon of Say Something or the fizzing Robyn like electro pop of Shake Your Head Yes. Velveteen is another remarkable vocal performance despite the sparseness of the drum and synth backing. You get a real feeling of tender, confessional release here that gives the record a great sense of relatable character.

Echoes of The Mynabirds’ previous more traditional indie folk Americana sound are present in the album’s second half, which unfortunately falls slightly flat with a tendency for more ponderous expansive tracks like the turgid Hanged Man. Yet such moments fail to overshadow the joyous beauty of the album’s brightest spots.

Lovers Know can definitely be considered a significant step up for The Mynabirds both in terms of musical development and emotional connection. It’s a rich, rewarding record, which should see Laura Burhenn and The Mynabirds progress to the next level of established American songwriters.

The Mynabirds MP3s or CDs

The Mynabirds on Spotify