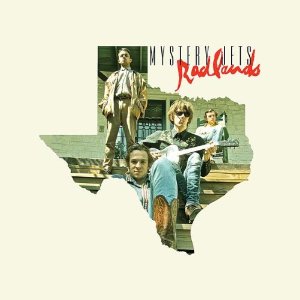 For a band as quintessentially English as the Mystery Jets, it’s curious to hear that they decamped to Texas to record their fourth album. With a title that puns on a Bruce Springsteen song (and a Terrence Malick film), have Blaine Harrison and company returned with ill-advised tattoos and a burning desire to become Josh Homme?

The answer is, unsurprisingly, no. Although the band’s eccentricities have been tempered somewhat since their debut album Making Dens, Radlands is still unmistakably a Mystery Jets album. There’s more emphasis on guitars, and they appear to have ingested a whole load of pharmaceuticals, but at heart they’re a great pop band, and their ability to write a heart-rending tune certainly hasn’t been hampered.

So, although the American influence is certainly noticeable, they haven’t lost sight of what made them such a great band in the first place. The title track seems to be drenched in sadness and inertia, with an opening lyric of “I’ve heard there’s a place where we go to die”, before the song bursts into life with a cry of “we’ll be together until hell freezes over”. Classic Mystery Jets, then.

Probably the most typical Mystery Jets song here is Greatest Hits, a witty and touching tale of splitting up a record collection when a relationship breaks down, which probably holds the record for most album titles mentioned in a three minute song. It also contains probably the best lyric ever written about The Fall (“No way you’re having This Nation’s Saving Grace, you only listen to it when you’re pissed, when you sober up it’s always ‘why the fuck are you still listening to Mark E Smith'”).

There are plenty of surprises too – The Hale Bop is reminiscent of Scissor Sisters, believe it or not, a shimmering slice of disco with some falsetto backing vocals. Sophie-Rose Harper and William Rees take over vocal duties for the country ballad Take Me Where The Roses Grow, while Lost In Austin appears to be about a drug-induced breakdown in Texas. The latter probably goes on for a bit too long, but it hints at an intriguing new direction for the band.

Yet as ever, Mystery Jets are best when they produce instantly likeable pop songs – the Hammond organ led Sister Everett, the heartbreakingly sad You Had Me At Hello, and best of all, the momentum-building, hook-filled Someone Purer which could be the best thing the band have made since Flakes. The cry of “deliver me from sin and give me rock’n’roll” will be bouncing around your brain after just one listen.

The plaintive acoustic lament of Luminescence (which even has crickets chirping in the background) ends the record on a high note – and it feels like the end of an era for Mystery Jets, especially as bass player Kai Fish has just left the band. Where they go from here is anyone’s guess, but this is another step in one of Britain’s most underrated bands’ evolution and growth.