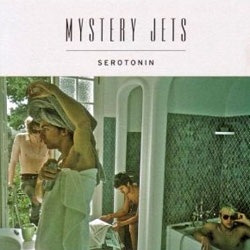 Changing record labels is enough to give any band a bout of mood swings, but three albums in for Mystery Jets, it’s a case of this particular prescription being 679’s loss and Rough Trade’s gain.

The Eel Pie Island five are fast becoming one of those groups that you hear on the radio, initially dismiss, and then find yourself inexplicably but joyously drawn in for more. Such was the case with the euphoric single Two Doors Down and the equally catchy Half In Love With Elizabeth, since when the group have pushed the boat out further from the shore.

They’re an eclectic bunch, increasingly so – on one hand revelling in post-Byrdsian harmonies, while on the other showing enough underground credibility to work with Erol Alkan or team up with Count & Sinden as they have recently. A case of spreading themselves too thinly, or a happy incidence of possessing the versatility of a figure such as Gruff Rhys?

For much of Serotonin, the latter is the case. You may have heard Dreaming Of Another World, the simple but ever so catchy lead single. Flash A Hungry Smile is every bit as good, reinforcing the Rhys comparison in its close relationship with Neon Neon‘s Dream Cars, not that that’s a bad thing, and there is an appealing psychedelia along with its breeziness, cheerily announcing how “the birds and bees have all got STDs”.

Throughout the emphasis is on melody, each song laced with a tune that is memorable either first or second time round. Producer Chris Thomas, he of Roxy Music‘s For Your Pleasure, knows just how to bring these tunes out, and helps score them so that the sound is bright, treble rich and ultimately sunny. Even when they’re singing about a relatively maudlin subject, the group sound positive and energetic, their brand of pop given a healthy, summery twist.

Just occasionally the band try something new and don’t quite get their heads round it – a case in point being the adventurous Show Me The Light, which bounds in on an eager four to the floor beat and wags its tail enthusiastically, but doesn’t fully add up to the sum of its ambitious parts. Elsewhere though, the songs are beautifully written and performed. Lady Grey is an enjoyable character study, Waiting On A Miracle has a winsome melody and even the overblown Too Late To Talk has a charming centre.

And therein lies Mystery Jets’ appeal, their rough and ready charm felt through songs that are packed with romanticism, whether past, present or future. Give it a few listens, and it will take up squatters rights in your head – and with that in mind, don’t be surprised if this particular writer comes back in a few weeks to lob an extra half star in their direction.