Nada Surf – The Stars Are Indifferent To Astronomy 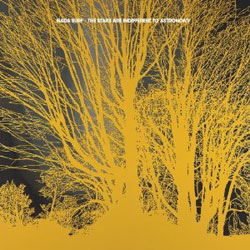 In the post-modern landscape of popular music, you’ve got a weird mingling of new, ankle-biting bands trying to sound like they’re from the ’90s (Yuck and Silversun Pickups come to mind). And, you’ve got the venerable dinosaurs who’ve been playing jangly pop for years and are now, largely unsuccessfully, trying to reinvent themselves for a modern audience (R.E.M. being the most prominent one, ultimately fizzling out late last year).

Then, there’s Nada Surf, who’ve accomplished something remarkable in scoring a hit (1996’s Popular) on MTV and radio when the former still played videos and the latter was at its alt-rock peak. After Popular, though, Nada Surf made that incredibly difficult transition into the indie underground, and have sort of grown up along with it. They were from Brooklyn before that locale evoked hipster irony or avant garde experimentalism.

Nearly two decades into their career, Nada Surf are still playing guitars (and, yes, jangly is still a fitting description), on their first album of new material in four years, The Stars Are Indifferent To Astronomy, which follows their excellent, if forgettable, covers album, 2010’s palindromic If I Had A Hi-Fi.

“We’ve always played faster and a little harder live, but we’d play so carefully in the studio,” says Nada Surf front man Matthew Caws of the band’s recording process this time around. The album was recorded live in the studio to “kind of get all the thinking out of the way,” and produced by Chris Shaw (Wilco, Brendan Benson, Super Furry Animals). The result is a noisier (by Nada Surf standards) album of mostly upbeat tunes, and it plays well without really challenging the listener’s patience or intellect.

Clear Eyed Clouded Minded opens the album with huge ’90s distortion and driving drums, offset by Caws’ understated, relaxed vocals (which occasionally sound a bit like Ben Gibbard, or maybe a toned-down James Mercer). When I Was Young looks back at youth and growing up with nostalgic longing over fingerpicking and a slow-building swell to cacophonous heights. It’s a power ballad if ever there was one. You could make the argument that this song in particular plays to the band’s designs on recapturing alternative rock radio (if it still exists), or landing a hit on a major television programme soundtrack. Maybe, but who can blame them?

Teenage Dream and Let The Fight Do The Fighting pull off a similar nostalgic trick, while Closing song, The Future, finds Caws musing, “We’re just imitations and hooks, hits that you remember nothing,” and admitting, “I cannot believe the future’s happening to me.” Given all the ironic posturing of the future as it’s turned out, it’s nice to know that Nada Surf are out there, keeping alternative rock off the endangered species list.

Overall, though, The Stars Are Indifferent is a quick listen, filled with nice hooks and effortless melody. The energy and exuberance of the album are a welcome change of pace, and longtime Nada Surf fans will not be disappointed. But, you can’t help wishing that Nada Surf had taken it just a step further. Perhaps they never set out to be torchbearers for a dying form, but no one ever does. They’ve got the chops to reinvigourate the genre if the mood strikes, but they seem content to continue business as usual, for better or worse.