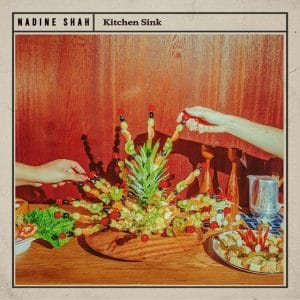 Nadine Shah follows her 2017 album Holiday Destination with the rather more domestic-sounding Kitchen Sink. But of course, there is more to her new record than washing up: the title track from Holiday Destination was written in response to a report that vacationers in Greece had complained that refugees on the beaches spoiled their holidays, and Kitchen Sink likewise shakes its head in anger and disgust at political wrongs.

Here, the principal subject matter is gender politics. The kitchen sink isn’t just a symbol of domesticity; it’s also a fundamental site of domestic labour, the chores that it in the not too distant past were described as ‘women’s work’. In this respect the album bears similarities to Anne Enright’s novel The Gathering, a book that features a surprising number of references to kitchen sinks. In that novel women cry into the washing up, a girl throws a knife that’s just been thrown in anger into a kitchen sink, a woman conceals a tumbler of gin in one. The ubiquitous counter-top basin is a scene of grief, drama and secrets.

The Gathering is narrated by a woman in her thirties, and so is Kitchen Sink. On one level it is narrated by Shah herself, telling of her experiences; on another, it’s about the experiences of many other women, too many other women for each to have their own stories assigned to them. Instead, the songs are carefully pitched between the personal and the general. Shah includes are enough sharply-worded details that her songs feel true to life, but she sings them in a way that’s somewhat detached and deadpan. It’s as if she’s not taking ownership of them for herself: after all, these songs are telling stories that happen over and over and which have many narrators.

She tells of catcalling on both Club Cougar and Walk; and of gaslighting on Buckfast, which includes the unedifying image of a man “Buckfast pissed”, and “eating food too embarrassing to list”. In the title track she references her half-Pakistani heritage while raising a middle finger to curtain-twitchers literal and metaphorical: “All they see is a strange face, whose heritage they cannot trace.”

But the expectation that women should settle down and have children is the age-old story that really permeates the album. Ladies For Babies (Goats For Love) tackles the infantilisation of women, but it goes further too. When Shah sings “All he wants in fairness, is a baby,” she is referring to both woman and imagined child. She takes on a similar topic, and ageing, in Dillydally: “I am aware of the passing of time,” she wearily sings. And in Trad she captures male expectation, the fertility question and a touch of anxiety in the opening line, “Shave my legs, freeze my eggs, will you want me when I am old”.

Musically the album is consistently engaging and occasionally surprising. Club Cougar and Ladies For Babies (Goats For Love), the first two tracks, both take the time to acclimatise you to the mood of the song before Shah’s vocals start, the former with brass fanfares, the latter with raga-like guitar. Trad is propelled by clock-like drums, satirising the idea of the biological clock, but a cinematic synth part before the chorus slips the song out of time and into a more dreamlike state. Walk buzzes and itches, horns bluebottling away over a beat that might “just want to walk”, as the chorus goes, but which is driven to an anxious trot.

Both music and subject matter are sometimes claustrophobic, but the whole of Kitchen Sink is infused with a humour and empathy that opens the album out. It might be on point, but it never feels overly worthy; it’s a truthful account told in engrossing style.