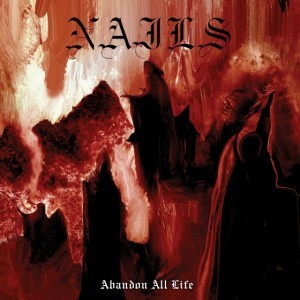 Picture the scene from Groundhog Day, when the clock clicks from 5:59 to 6:00, and Sonny and Cher once again welcome Bill Murray into his temporal prison. Now imagine that instead of I Got You Babe, the radio plays a succession of downtuned metal riffs and a man screaming incomprehensible gibberish in his ear. That’s what Abandon All Life is like.

For just a month or so ago, Southern Lord records put out the excellent Bushcraft by Canada’s Baptists, and this record follows its formula to a frightening extent. Gravelly vocals? Check. Intense, superhuman feats of percussion? Yep. D-beats? Of course. Mostly very short fast songs with one long slow one in the middle and one at the end? You got it. Influenced by genres with typically bad production but given crushing clarity by producer and Converge guitarist Kurt Ballou? Give that man a medal.

You could go on. Which, to be fair, Nails don’t; the entire album clocks in at just over 17 minutes, and Wide Open Wound (one of those “long” songs) would still make a perfectly radio-ready single without a single edit. If it didn’t sound like Satan requesting a strepsil in an abattoir, obviously. But dig deeper, and there are differences.

For a start, Nails are more unashamedly metal than their labelmates, who rigourously avoided the cliches of the genre and looked to crust-punk and hardcore for inspiration. Nails embrace these trappings, from gothic script logo to hellish album artwork, and while they do incorporate hardcore elements on occasion, it’s grindcore acts like Napalm Death who form a bigger influence. And – just as the sound guys on Jurassic Park incorporated a baby elephant into T-Rex’s layered roar – there’s a deranged banshee-like top note in Todd Jones’ vocals that points to an apprenticeship in the shadowy forge of black metal.

The other difference is that it simply isn’t quite as good. You can be uncompromisingly heavy and still memorable, but listening through, it isn’t always clear where one song ends and another begins without a glance at the laptop screen. The punkier title track stands out, as does the ferocious No Surrender, both featuring in their breakdowns the standout riffs from the album. But too much of the rest is lost in a barrage of blast beats, bluster, and bludgeon.

Perhaps this is a complaint of genre, rather than a critique of the band, who carry it off with as much angry panache as you’ll ever hear. But unless they’re aiming for the ear-mangling experimentalism of the likes of The Locust, there needs to be just a little more there that the mind and ears can process into something resembling a series of notes on a stave. And that doesn’t mean compromise, it just means write better riffs.