by Talia Soghomonian
published: 24 May 2010 in Album Reviews
Tweet 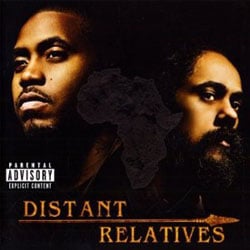 On the opening track of Distant Relatives, Nas declares that he and Damian Marley are the kings of their respective musical genres. Perhaps a cocky claim, but he’s not quite wrong. Both are the offspring of celebrated musicians: Nas is the son of jazzman Olu Dara and Damian is you-know-who’s youngest. Reunited by a shared interest of their ancestry, they first collaborated on Road To Zion, which appeared on Marley’s 1996 album Welcome To Jamrock. The spiritual brothers have now come up with a collection of songs whose proceeds will go to building a school in Africa.

Distant Relatives isn’t a classic collaborative album, but rather an ode to Africa, a reminder of its problems and an attempt to connect music back to its roots through reggae and hip hop. The smart hooks and the catchy chorus of opener As We Enter are pure reggae dancehall but also evidence of the undeniable bloodline between both genres.

Their musical ancestry is peppered throughout. Tribal War is all African percussions, sampling Mulatu Astatke‘s Yegelle Tezeta. “Everyone deserves to earn/Every child deserves to learn,” sings Marley, while featured guest K’naan calls to mind Africa’s bloodiest asset: “I drink poison then vomit diamonds.” The beautiful Patience samples Amadou And Mariam and evokes the tragedy of the continent and its harsh realities of civil wars, but also their undying strength: “I’m fearless/Don’t you try to get hold of my soul/It’s like a military soldier since seven years old.” Hope is a biggie here. Damian’s brother Stephen Marley guests on the spiritual In His Own Words which basically asks the suffering to always keep the faith in a higher power despite the hardships.

But it is when they go old-school that our power duo really excels. Dispear provides a classic African sound, both tribal and intense, while Nah Mean offers a fierce performance reminiscent of the ’90s’ gritty rap.

It would be a great album, were it to carry on in that manner, but then comes a PC moment with My Generation philosophizing: “I reach ’em like Bono/So get rid of your self-sorrow.” Despite its self-importance, it is at least making an effort at addressing the future generation. The track features a children’s choir affirming “my generation will make a change” and Lil Wayne rapping in his flawless flow about these kinds being “led by a black president.” Joss Stone also provides vocals, or rather squeals – there goes her attempt at gospel… But at least they didn’t invite Bono to wail on the track.

Featuring Dennis Brown, The Promised Land imagines a new and improved Africa, but first Africa Must Wake Up. This closing track is a seven-minute epic featuring K’naan again and a killer guitar solo. The track refers to the cultural and spiritual heritage of Africa, inviting awareness as a prelude to change, with Nas and Damian doing their bit to break their own barriers. They’ve made an album that is bold and commendable, and nothing like as preachy as it might have been.