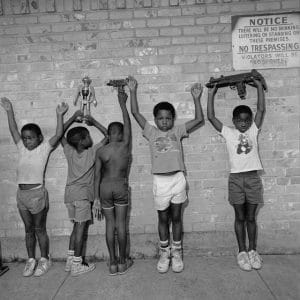 Nas has a curse, and that curse’s name is Illmatic. Having released one of the best rap debuts of all time 24 years ago, each of his subsequent releases have been compared to it and been found wanting. With Nasir, the sample-based production sometimes brings to mind Illmatic producers DJ Premier and Pete Rock, but elements like the angry Puff Daddy ad libs on Not For Radio and the smooth R&B stylings of Tony Williams on Bonjour immediately remove the album from that introspective, boom-bap world.

Kanye West’s production continues in the minimal vein of his work on Pusha T’s Daytona, with chopped up snippets of film soundtracks, Iranian rock music and Slick Rick over punchy percussion. The latter is prominently featured on Cops Shot The Kid, the titular phrase (lifted from Children’s Story) looped around to create a fidgety, jarring groove while Nas and West opine about police brutality.

Nas’ lyrics are of a piece with other “Five Percenter” rappers from his era, in that the subject matter veers from social consciousness (“Glocks were created for murder enhancement”) to complete hearsay (“[John] Edgar Hoover was black”) in an instant.

That being said, his lyricism is as sharp as ever, especially on Adam And Eve where he muses on familial lineage over a wandering, contemplative piano line. The seven-track album is said to be loosely based around the seven deadly sins, and while some theorised links seem to be a stretch, the lines about excess and gluttony on White Label and jealousy annd envy on Simple Things do back the idea.

There are some slight missteps, like West’s tedious hook on Everything, but Nasir proves Nas’ ongoing relevance as one of New York’s biggest living rappers, with the best overall production and best quality control since Illmatic: the curse may finally be lifting.