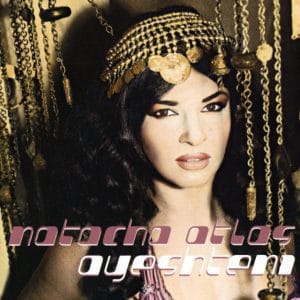 After a hectic 1999, which saw Natacha Atlas win the Best Female award at France’s equivalent of the BRITs, sell 100,000 albums and have a big hit with the cover single Mon Amie La Rose in France, not to mention her appearance alongside Jean-Michel Jarre in front of the pyramids at Giza, the belly dancing Belgian-Egyptian singer went to Cairo to strengthen her roots with her ancestors’ homeland.

The result of her time there in 2000 is Ayeshteni, an eclectic album featuring a cover of Jacques Brel‘s Ne Me Quitte Pas and a devastating take on Screamin’ Jay Hawkins‘s I Put A Spell On You, plus a remix of her own track Manbai by Nitin Sawhney. Name dropping doesn’t get much better.

Ayeshteni is much more than name dropping, however, as anyone who knows either her solo work or any of the recordings she made as a member of Transglobal Underground, who produce much of this album, will expect. Veering from predominantly Arabic vocals, there are also French and English vocalisations, all carried off with a digital production which borders on dub, yet adds to the rich Arabic melodies and oud arpeggios.

Just about every track has the listener seductively dancing around the room, checking only when interrupted by amused flatmates – and if you’ve seen her live, you will know your belly dancing has a lot to live up to.

Expect to hear more of her music in middle eastern restaurants soon; expect her also to go from strength to strength. Her solid vocal base is only emphasised by fusing modern recording techniques with traditional instrumentation, while her backing band offer fine support, especially with regard to rhythm.

An uproarious medley of middle eastern exoticism combined with unexpected delights in the form of French and English covers, Ayeshteni is a rather fine album.